PETALING JAYA: The naming of the candidates by the various parties should have brought clarity to how the 15th General Election is shaping up. It didn’t.

Instead, things have got more murky with shifting allegiances, party-hopping and some veterans making their return in different parties, with just two days to nomination day on Saturday.

One of the biggest names to be on the move is senior Umno member and former minister Datuk Seri Shahidan Kassim who is said to be defending his Arau parliamentary seat despite being dropped as a Barisan Nasional candidate. 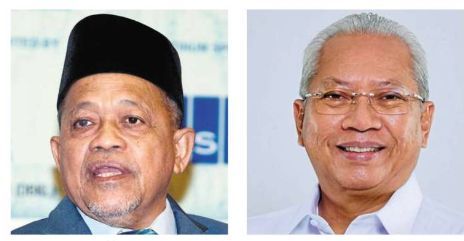 Still a lot to offer: Despite being dropped by Umno, Shahidan (left) and Annuar are getting offers to defend their seats in Arau and Ketereh, respectively.

Shahidan has confirmed that he still wanted to run for Arau and would do so under another party’s ticket. There is no shortage of suitors, though, as he is seen as capable of beating Datuk Rozabil Abdul Rahman, the Barisan candidate.

Perikatan Nasional, in fact, has not named a candidate for Arau and Shahidan could fill the vacancy.

Another Umno MP, Tan Sri Annuar Musa, who was also dropped from the Barisan list, has reportedly received offers from Perikatan and Parti Sosialis Malaysia, among others, to defend his seat in Ketereh, Kelantan.

However, last night, the Perikatan candidates for Kelantan were announced but he was not among the list of candidates.

Barisan has named Kelantan Puteri Umno chief Marzuani Ardila Ariffin as its Ketereh candidate while Bersatu’s Datuk Khlir Mohd Nor is slated for the seat.

Both Shahidan and Annuar Musa are long-time Umno warlords.

Two other candidates, known for their association with DAP and PKR respectively – Jeff Ooi and Wee Choo Keong – will now be contesting in Bayan Baru and Wangsa Maju under Warisan.

Ooi, 67, had contested and won the Jelutong parliamentary seat in the 2008 and 2013 elections while Wee, 69, won the Bukit Bintang seat in the 1990 and 1995 elections under the DAP ticket. He then went on to contest and won Wangsa Maju under the PKR ticket in 2004.

Another candidate who will also be standing under the Warisan ticket is former MCA president Tan Sri Ong Tee Keat.

The 66-year-old won in Ampang Jaya in his first election outing in 1989, while his last outing was in 2008 where he contested and won in Pandan.

Incumbent PAS lawmaker for Tumpat Datuk Che Abdullah Mat Nawi has been tipped to contest as a Barisan candidate, especially after the the coalition did not announce a name for the seat on Tuesday.

The 62-year-old is no stranger to elections, having contested the Wakaf Baru state seat in 2008 and 2013 and won the Tumpat seat in 2018.It is also learnt Barisan is considering another PAS man – Datuk Dr Mohd Khairuddin Aman Razali – for the Kuala Nerus seat in Terengganu.

The former plantation industries and commodity minister won the seat in 2013 and 2018 elections.

Earlier this year, Mohd Khairuddin, 48, resigned from PAS to become an Independent MP. Prior to that, he had been removed as a member of the party’s syura council and its central working committee.

When naming its candidates for GE15 on Tuesday, Barisan did not announce candidates for Tumpat, Kuala Nerus, Tanjung Karang, Jempol, Kuala Pilah and Bandar Tun Razak.