PETALING JAYA: Malaysia has lost more than 15% of its beaches, with the sea reclaiming some 1,380km of shoreline over the last few decades.

It is especially bad in the peninsula where more than 30 beaches have experienced critical erosion, according to government data. 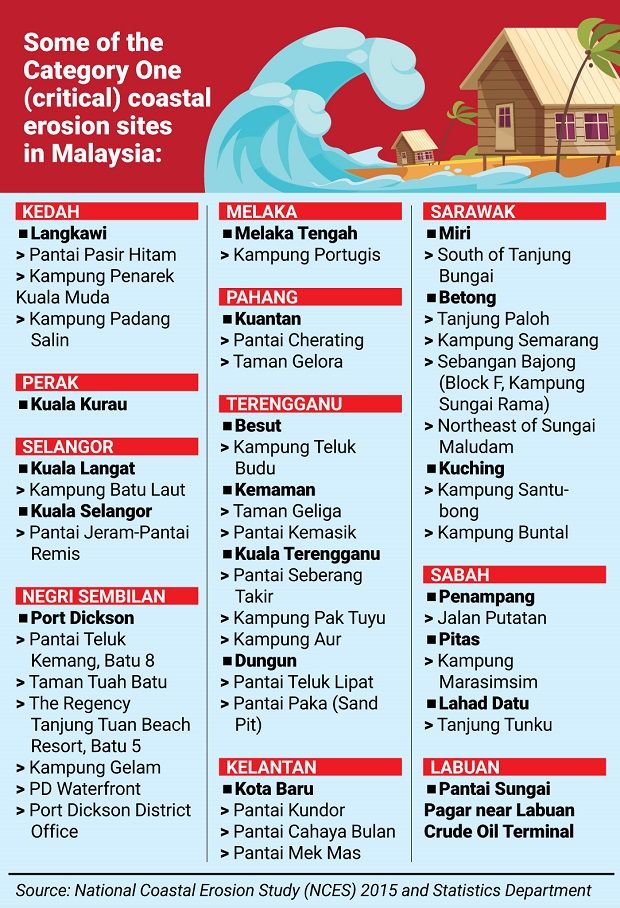 Many of these beaches could be lost in the next 10 years or so.

These were just some of the shocking revelations in the National Coastal Erosion Study 2015.

The study says critical erosion happens when the coastline retreats at a rate of more than 4m a year with generally fairly dense human settlement as well as some commercial or industrial activities.

“Erosion along the coastline is widespread. Consequently, coastal erosion is a national, rather than local, problem in Malaysia.

“There are many important economic and social activities taking place along the coastal areas so the consequences of coastal erosion have become an increasingly serious concern,” it said.

Malaysia has a total of 8,840km of shoreline, with the peninsula alone stretching for 3,772km.

The study showed that Terengganu had eight areas with critical erosion, while Penang and Sarawak both had seven coastal zones at critical levels.

Of this, Kampung Pak Tuyu in Kuala Terengganu saw the highest length of coastline erosion at almost 16.5km. The beach was eroding at 11.8m a year.

Meanwhile, the coastline that saw the highest rate of erosion was Kampung Batu Laut, in Kuala Langat, Selangor, which had an erosion rate of 24.2m per annum.

The report noted that almost all of the peninsula’s 3,772km of coastline comprises easily eroded alluvium.

“The basis of the study is identifying critical erosion areas with an aggregate length of 140km with facilities that were in immediate danger.

“Significant erosion areas with an aggregate length of 240km consisted of facilities that would be endangered within five to 10 years,” it said.

“Acceptable erosion areas with an aggregate length of more than 900km are generally undeveloped and presently contain no facilities that will be endangered within the foreseeable feature,” it added.