The calls were made as the nation faces the threat of a possible Omicron wave while also addressing low voter turnout as recorded during the recent Sabah, Melaka and Sarawak state polls.

“My view is that the main factor is the disillusionment of voters with the political situation in the country,” said Bersih 2.0 chairman Thomas Fann yesterday.

“The Covid-19 concerns and the restrictions on campaign activities in the Melaka and Sarawak state polls had an impact on the ability of political parties and candidates to get the masses to come out to vote,” he added.

Apart from the political parties, he said the Election Commission (EC) should also do more to encourage voters to come out by making the balloting process more accessible. 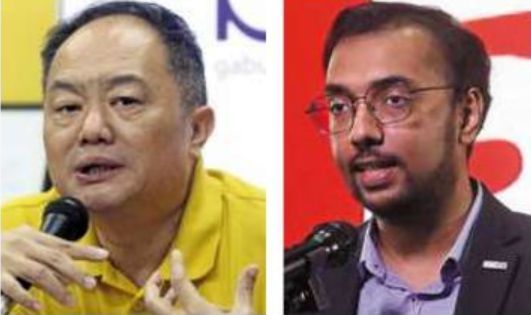 Big and accessible: Fann (left) and Tharma are rooting for mega voting centres.

Among the suggestions is the setting up of mega voting centres in the respective states to allow outstation or absentee voters to cast their votes.

“Such mega voting centres would solve the problems of outstation voters, especially those from Sabah and Sarawak.

“They could be allowed to cast their votes into special ballot bags three days before polling day.

“The bags could be couriered back to their respective returning officers to be counted in their home constituencies on polling day,” explained Fann.

He added that such a polling centre could also be set up across the Causeway to allow Malaysians, who are working in Singapore but unable to return home, to vote at the upcoming Johor state election.

At present, almost 60,000 Malaysians from the peninsula are living in Sabah and Sarawak, while there are about 500,000 Sarawakians and Sabahans working in Peninsular Malaysia.

Fann said that some of the proposed reforms could be implemented immediately as they were administrative procedures within the EC’s purview.

The Johor State Legislative Assembly was dissolved on Jan 22, paving the way for a state election to be held within 60 days.

The polling date for Johor state polls will be announced by the EC after it meets on Feb 9.

“It is proven that the use of PPV for vaccine administration made it a safe process despite the gathering of a large crowd.

“So why not apply the same for voters outstation. Not only does this allow Johor citizens to exercise their rights to vote (while away) but it also minimises the risk of a potential spread of Covid-19 due to large gatherings,” he said.

He cited the move by the Indonesian government as an example where polling stations for its citizens were set up in Malaysia during their general election.

“The lack of buzz and excitement due to a lack of campaigning was a large contributor to the low turnout during previous (state) elections.

“Apart from being part of the electoral process, campaigning also creates a sense of excitement while being especially important for newer parties to go on the ground and meet their constituents,” he said.

Merdeka Centre co-founder and programme director Ibrahim Suffian said it is highly unlikely that online voting will be be carried out for the Johor state election.

He said that it is crucial for candidates to find creative ways to campaign on social media.

“A high volume of creative content is needed because there is a lot of information on social media, so perhaps political parties need to spend more money here,” he said.

There will be some 700,000 newly registered voters eligible to vote during the Johor state polls.

This comes after the implementation of automatic voter registration and lowering of the voting age from 21 to 18 on Dec 15 last year.

In Pontian, Johor, caretaker Mentri Besar Datuk Hasni Mohammad is confident that the state will show a good example with regard to a good voter turnout.

“The public should participate in the forming of the new government,” he said after presenting Chinese New Year goodies in his constituency of Benut yesterday.

“If I had my way I would want to get the election done as soon as possible. But the EC needs time to prepare for this state election which requires more returning officers and staff.

“Let’s give the commission enough time to get everything ready for a smooth election. So if the election is to be held at end of February or early March, then everyone needs to play their part to come back and vote,” he said, adding that this is part of democracy.

Hasni also pointed out that in GE14, they (Barisan Nasional) was blamed for having the elections on a working day in a bid to get a lower voter turnout, but that didn’t happen.