When it was pouring in December last year, Chandra Arjun and friends were monitoring social media for the inevitable aftermath – homes devastated by sludge and muck.

The goal was to help clean up and collect rubbish and other waste to alleviate the burden of those affected by floods, the mission of Cuci Malaysia, an NGO Chandra manages as president.

“We began by contacting local councils and municipalities to gain insight into what was happening on the ground.

“Then we set up a Google Form, asked users on Telegram and Twitter to find folks that needed help,” Chandra says.

Once the public reaches out, Cuci Malaysia looks at how it can help those in need based on its network of volunteers. 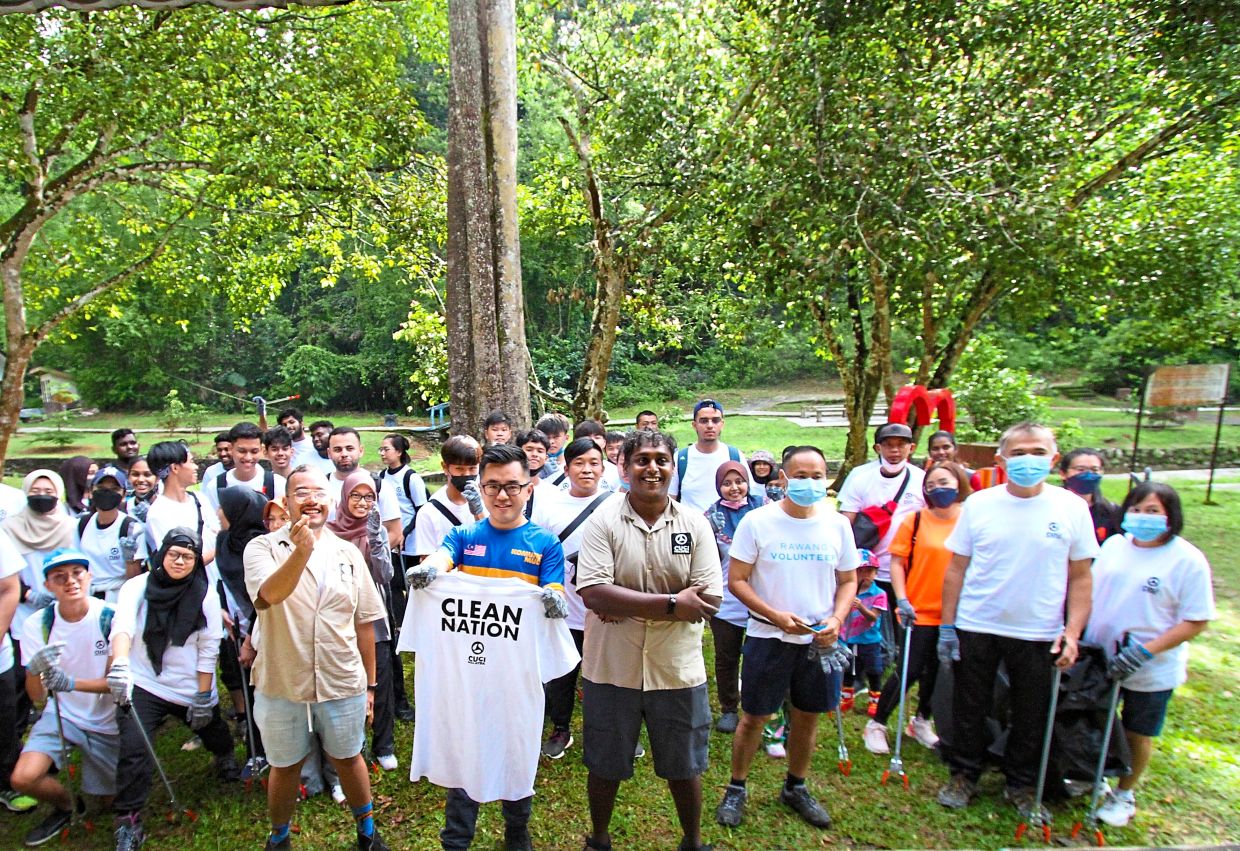 On Dec 24, the NGO launched a Cuci Mega campaign for Kampung Bukit Lanchong, a village in Subang Jaya, Selangor.

It put out a call for help on social media, and over 400 people responded by showing up the following Sunday to help, shocked by the damage caused by the storm.

“It was like a war zone. The majority of those who showed up were university students and they were eager to help. That is the power of our people,” Chandra says.

In the digital age, NGOs are exploring new ways to mobilise an army of volunteers for various causes. Mercy Malaysia vice president II and legal consultant Datin Raja Riza Shazmin Raja Badrul Shah noticed that volunteer programmes were moving online as early as 2003, but she thinks the pandemic was the “nudge” that made it happen.

Volunteers can sign up online to participate in programmes, set up fundraising campaigns or channel donations.

The Internet simplifies everything and encourages more people to sign up, she says, adding that younger people, in particular, expect the registration forms to be online.

Sols 24/7, an NGO that provides free education, and vocational and social empowerment programmes, teaches volunteers how to promote crowdfunding campaigns on social media. She goes on to say how important it is for volunteers to receive training and tutorials, as well as marketing resources to help them create content.

“Providing updates on how the donations have benefited students, for example, or the progress of installing solar panels in a community is critical for campaigns,” she adds.

Student Ludwig Kwan, a volunteer with Cuci Malaysia who not only helps with clean up activities but also photographs the NGO’s efforts, believes it is critical to get the message through clearly.

“It must be effectively pushed because social media algorithms work in such a way that unpopular postings are lost,” he says.

Hanisah Zainuddin, a cybersecurity student at the University Malaysia of Computer Science and Engineering (Unimy), says her course requires her to do 15 hours of community service. “We were introduced to Cuci Malaysia by our lecturer and have worked closely with the NGO on a few programmes.

“Prior to every event, we’ll hold a briefing to remind everyone of our objectives so that we can truly make a difference,” says Hanisah, the Unimy programme lead for the Taman Eko Rimba Kanching clean-up initiative last June.

“We have become dependent on technology to run our daily lives,” Danutcha Catriona says, adding that Sols 24/7, which held the majority of its lessons offline, had to transition to remote learning during the pandemic, conducting them largely over WhatsApp. While there is no denying the value of emerging technologies, they are too costly for NGOs, says Danutcha Catriona.

“It was a learning experience for us. Some of our pupils from Orang Asli communities had difficulty downloading their homework through WhatsApp because it became too overwhelming as there were many modules,” she says.

A web application – Sols Edu – with a minimal user interface and no extraneous elements was created to make it easier for students to access classes, materials and other resources.

“The majority of our students are on prepaid plans with limited data. We can’t have them wasting their bandwidth by attempting to load a heavy website.

“We had to dial back on some of our measures so that they did not become a burden for our beneficiaries,” she explains.

The software enables teachers to immediately analyse a student’s work and take the appropriate action if the pupil is under-performing. It also allows the NGO to gauge the impact of the education modules – if the students are engaged or otherwise.

“When usage drops, we need to consider what went wrong. Did we bombard them with questions? Were they overly difficult?

“Some students may just want to do the exercise faster and receive results right away, in which case we have to make the module more exciting,” she says.

Meanwhile, Mercy Malaysia is looking for tech partners to help it keep up with digital demands and go paperless.

“Instead of handing out papers physically after each mission, we may try something new, like generating a profile history of the volunteer and providing ecertificates,” she says.

While there is no denying the value of emerging technologies like artificial intelligence and blockchain – which powers cryptocurrency transactions – they are pricey, says Danutcha Catriona.

“How do we navigate the cost as an NGO? We have an in-house development team, which is currently self-funded and we are looking for investors.

“We don’t want to pass the cost of technology development to our beneficiaries,” she says.

Even small costs can have a significant impact on a B40 family, according to Danutcha Catriona, who adds that some families send their children to work to make ends meet. Chandra says Cuci Malaysia has started using QR codes to register volunteers during campaigns, as it’s easier because everyone has a mobile phone.

“The QR code will take you to a Google Form, which eliminates the need for paper and helps reduce waste.

“Because we’ll be outdoors, the paper will most likely get wet or crumpled, preventing us from bringing back the data for proper recording.

“Storing the info on the Cloud helps us simplify our approach and optimise the process,” says Chandra.

However, technology can be misused or make a situation harder to manage when people don’t cooperate or follow rules. Though Chandra welcomes all to volunteer, he urges them to seek information from local councils, go through proper channels and register when required before showing up. — LUDWIG KWAN

In one of Cuci Malaysia’s projects, the NGO sent out a request for aid on Twitter, which led to people showing up unannounced and bringing unneeded items, like too much food, according to Chandra.

“That was a headache for us. Some showed up, dropped packets of food and then left.

“We had to find ways to keep the food from going to waste,” he says.

A situation can also be made worse, he continues, when too many people show up, causing traffic congestion and making crowd control a nightmare.

Though Chandra welcomes all to volunteer, he urges them to seek information from local councils, go through proper channels and register when required before showing up.

“If you show up unprepared, you could be a burden to others, even to those who require assistance.

“There will also be instances when the people no longer want our help – we have to respect that and move on,” he adds.

Cuci Malaysia public relations manager Ahmad Muzzamil Mohd Faridza says people who use such projects for publicity or photo ops have left a negative impression on the aid recipients.

“I remember one event where someone showed up with a pickup truck and started handing out food from the vehicle to those below him.

“He was also surrounded by a camera crew. I felt that was just bad optics because he was not treating the survivors with dignity and using them as aesthetics to boost his own image,” says Ahmad Muzzamil.

According to Raja Riza Shazmin, volunteers are cautioned not to engage in inappropriate behaviour, such as photographing people receiving aid, when they sign their registration forms.

“Selfies are more difficult to manage because they are taken with mobile phones rather than larger traditional cameras.

“We’ve had this issue before, but how do you stop someone from posting on social media platforms? Instead, I think it’s more important to teach them about sensitivity and proper conduct,” she says.

Communicating effectively could also become a challenge when there are too many enquiries, says Chandra, citing an event to help flood victims late last year.

The communication breakdown resulted in some operations being disrupted.

“We also had far too many people texting us personally, and we were unable to assist them. And to this day, I still regret it.

“There were volunteers who wanted to help by travelling on their own but under our NGO, but who will help them if something goes wrong?

“So, we have learned to reach out to the relevant people in certain areas and find a person to be put in charge of looking after our volunteers,” he says.

Nonetheless, he believes that technology, notably social media, has increased the visibility of the NGO and hopes to connect with more like-minded people to keep Malaysia clean.

He also wants to keep track of how much trash is picked up from each spot and figure out what caused the pileup.

“It’s not sustainable to collect trash today only to discover that the place is full of trash again next week.

“The information will go a long way towards building a framework for focusing on areas that need attention while learning how to manage waste properly in the country,” he says.

According to Raja Riza Shazmin, more volunteers are coming forward now due to the Covid-19 pandemic and the massive floods in Malaysia.

“In these times, the feeling of wanting to give back is stronger than ever,” she says.