In the 14th General Election, Puchong MCA chairman Datuk Ryk Liew Yuen Keong was chosen to represent Barisan but this time, all eyes seem to be on Bangi MCA deputy head Datuk Hoh Hee Lee, who was Balakong assemblyman for three terms from 1995 to 2008. Hoh, a lawyer, is seen to have the experience for the job, but he told StarMetro that the final confirmation was still being discussed by the party leaders.

There was also talk that Bangi Umno division chief Datuk Mohd Zaidi Md Zain could be a potential candidate, but when met at his home in Kampung Teras Jernang, the former syariah lawyer who currently manages a farm, said he would not be contesting. Syahredzan has been named as the PH candidate for Bangi.

He, however, mentioned that Barisan was ready to fight and win all parliamentary seats in Selangor.

Malays and Chinese make up the majority of voters here at 51% and 36% respectively, while 12% of votes are from the Indian community and 1% from other races.

Under the Barisan coalition, there are as many as 10 potential candidates from various backgrounds. All are below the age of 55 and comprise business people, town planners, engineers and lawyers.

Some were community leaders with various NGOs and heads of residents associations, revealed Mohd Zaidi.

The Bangi PAS division, which will contest under PN, hinted that its division chief Shafie Ngah, who is also the Bangi PN head, may be the likely candidate. “It could be one of them or none of them,” said Afif.

PAS had announced at its annual general meeting last month that 30% of all its GE15 candidates would be from the youth wing.

“This is so the youth will have a stronger voice in terms of policy-making, as 20% of our voters will be between the ages of 18 and 25 this time,” said its new media chief Shaari Khalid.

For PH, DAP’s Syahredzan Johan will be contesting the Bangi seat. Incumbent Ong Kian Meng had announced earlier that he would not defend his seat. 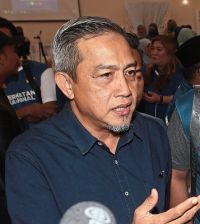 Shafie is the likely PAS candidate for Bangi.

“Bangi is the constituency with the highest number of voters in Malaysia with 330,000 voters.

“Altogether, it has an estimated population of one million, including overseas voters.

“It is an example of urbanisation and the problems that come with it such as traffic, public transport and flooding. If I get the chance to contest here and get elected, I know I have support from the grassroots such as the councillors from the local authority to help me serve the electorate,” said Syahredzan.

The audience was kept on the edge of their seats when Rajoo affected a pause after the mention of potential candidates in mid sentence.

But when he continued by saying “they had not decided yet”, it was obvious he would not be divulging any names.