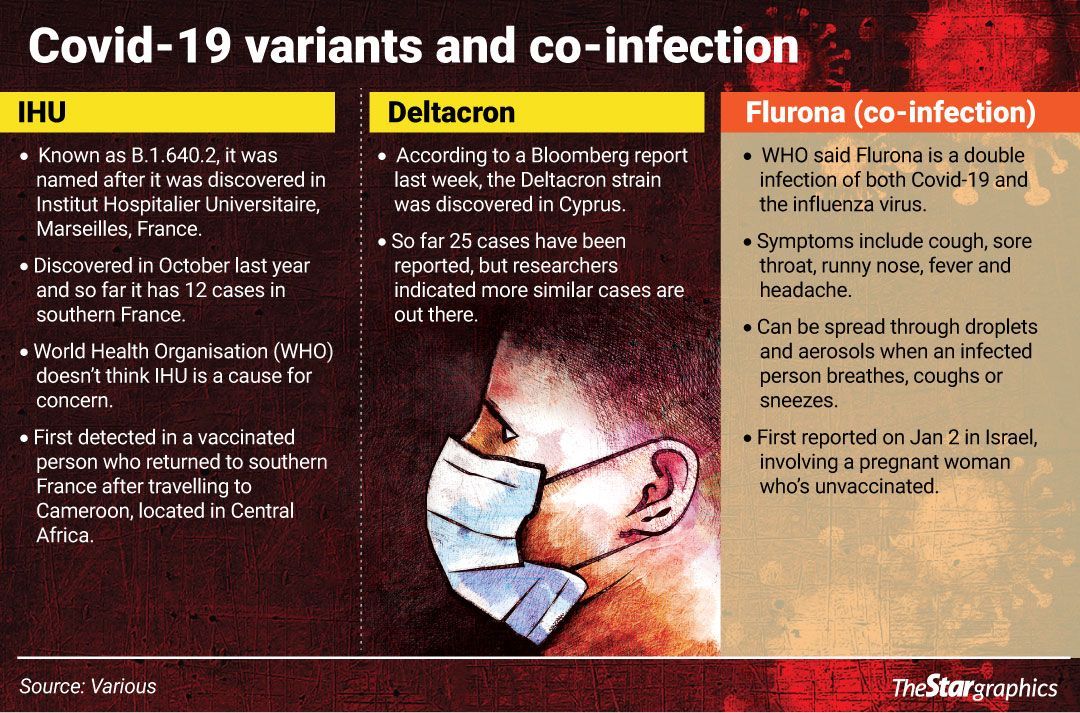 PETALING JAYA: The new Covid-19 variants – Deltacron and IHU as well as a co-infection known as Flurona – in several countries might be concerning, but experts say that it shouldn’t warrant another full-scale lockdown should there be another outbreak in Malaysia.

Health expert Prof Dr Moy Foong Ming of Universiti Malaya’s Department of Social and Pre-ventive Medicine, said restrictions on celebratory activities such as weddings and parades at festivals should be implemented.

“If the situation still does not improve, maybe impose a restriction on interstate travel for social purposes,” she said.

IHU was named after it was first discovered in Institut Hospitalier Universitaire, Marseilles, France, in October last year.

It was first detected in a vaccinated person returning to France after travelling to Cameroon, located in Central Africa.

The World Health Organisation (WHO) had said that the IHU variant was not a cause for concern. To date, 12 cases have been detected in southern France.

Dr Moy also said self-testing should only be done if an individual has had close contact with Covid-19 patients, and showed flu-like symptoms, or is about to attend a mass gathering like a wedding or party.

Dr Moy proposed that workplaces encourage their employees to conduct self-tests at least twice a week.

“This will reduce the chances of transmission within the workplace when physical distancing is hard to maintain.

“The same should be done in schools,” she said.

Aside from IHU, other variants such as Flurona and Deltacron were reported in several parts in the world.

Flurona was first detected on Jan 2 in Israel. The patient is pregnant and was previously vaccinated.

The WHO said Flurona is a double infection of both the Covid-19 and the influenza virus, and its symptoms include cough, sore throat, runny nose, fever and headaches.

The Deltacron variant, on the other hand, was first discovered in Cyprus last week with 25 cases reported.

Researchers have indicated that there could be more undetected cases.

Commenting further on the new variants, Dr Moy assured that at present, transmissions of the said variants were only confined to the respective countries that discovered them.

However, Dr Moy said Putrajaya mustn’t let its guard down as it continues to monitor the trend of transmission.

“If there is global transmission, then the government should enforce quarantine on people who enter Malaysia from those affected countries.

“Genomic sequencing should be carried out on all important cases in order to find out the variants that they carry,” she said.

Dr Moy also said the emergence of the new variants shouldn’t be worrying for Malaysians, as they have not been confirmed by WHO yet.

“We should maintain all standard operating procedures, avoid crowded and poorly-ventilated places, and avoid going out. Conduct self-testing if you have flu-like symptoms and go for booster doses when appointments are given,” she added.