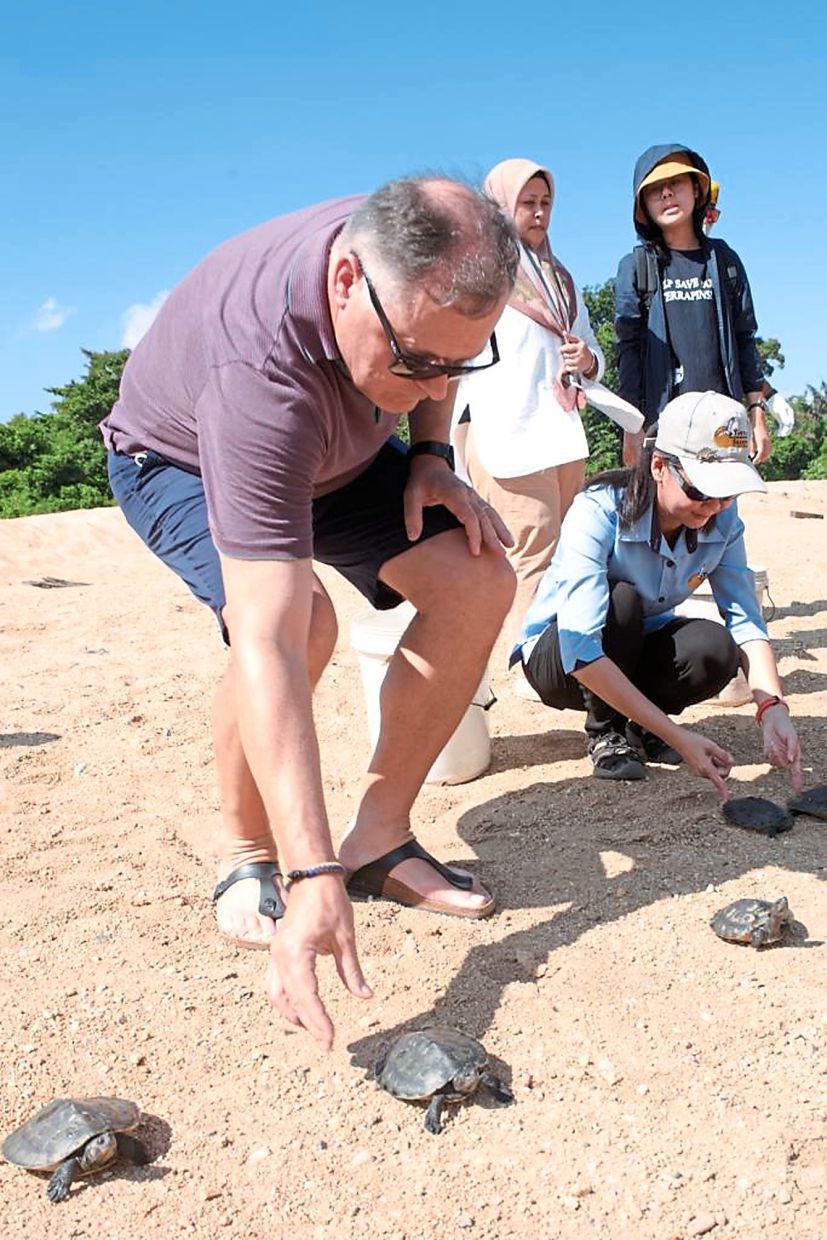 Be free: Hay helping release some of the 25 river terrapins into the Kemaman river over the weekend.

PETALING JAYA: Twenty-five Southern river terrapins (tuntung or Batagur affinis) were given some VIP attention before they were released into Terengganu’s Kemaman river over the weekend.

British High Commissioner to Malaysia, Charles Hay, visited the River Terrapin Conservation Centre in Kg Pasir Gajah on Sunday and was given the honour of releasing the three-year-old terrapins hatched and raised by the conservation centre.

The centre’s director, Dr Chen Pelf Nyok, hosted Hay and his delegation and explained what went on behind saving the threatened species listed as “critically endangered throughout its range”.

The species has been listed on the International Union for Conservation of Nature (IUCN) Red List as far back as 2000.

A freshwater turtle researcher, Chen has brought conservationists, the government and the local community together in an unprecedented effort to save a group of critically endangered river terrapins.

The Wildlife and National Parks Department (Perhilitan), along with the villagers in Kg Pasir Gajah, were also part of the river terrapin research and conservation project.

“Our flagship project – the community-based river terrapin research and conservation project – was initiated in 2011 and it is our long-term commitment to save the critically endangered river terrapins of the Kemaman River from extinction,” said Chen.

She added that the collective effort has saved more than 7,100 river terrapin eggs from human consumption. In addition to that, more than 4,000 young terrapins have been released into the river.

Chen, who is co-founder of the Turtle Conservation Society of Malaysia, also runs “Turtle Awareness Programmes” with primary school students across Malaysia.

The Turtle Conservation Society of Malaysia is the first not-for-profit organisation in Malaysia dedicated to restoring depleted wild turtle populations of freshwater turtles in the country through research, conservation, rehabilitation, education and public outreach.

“Without the collaboration from Perhilitan and the local communities, all these river terrapin eggs would have been consumed.

“This is a significant achievement, considering the fact that this species is listed as one of the Top 25 most critically endangered freshwater turtles in the world, out of approximately 335 documented species,” said Chen.

Hay said the pandemic had prevented him from visiting the terrapin centre earlier.

“I am very pleased to be able to visit Terengganu and see Dr Chen whose dedication earned her the Commonwealth Points of Light award from Queen Elizabeth II in 2018.

“It was a real privilege for me to be given an overview of the untiring efforts by her team and related agencies,” Hay added.

The centre is now open to the public on an appointment basis. To schedule a slot, email pelf@turtleconservationsociety.org.my