And then the floods struck.

The water damaged the electrical appliances in his shop and also left him without power supply.

“We need electricity to store our frozen food. But when the flood hit us, there was no electricity for four days and our food was spoiled.

He had bought insurance that focused on public liability for his customers.

“But we did not buy insurance for natural disasters. Therefore, we will have to stop business for the time being,” he said when contacted.

Kiu said it would cost him a lot of money to get his freezers fixed.

“Some freezers cannot be fixed as they had already rusted. A shopkeeper cleaning beverages at a shop in Taman Sri Nanding in Hulu Langat.

“My partner and I will have to fork out a lot of money to fix them. And we were told that the condition of the freezers might be affected even if we get them fixed.

“It is a risky move as our products need to be frozen at all times to ensure freshness.

“Therefore, we decided to stop business first, clear up the shop and pay our suppliers,” he said.

Before this, Kiu said he used to supply seafood to restaurants and eateries.

“However, the Covid-19 pandemic had affected our business, so we decided to change our sales channel to families instead.

“The flood has worsened our situation,” he said.

Grocery store owner Tee Tze Wei, 42, said floodwater entered her shop so quickly that she did not manage to move her goods to higher ground.

“It has been a family business for 49 years. This is the first time we were so badly affected.

“In the past, the water level was around 15cm only and we managed to move our items to safety.

“This time around, the water was more than 60cm.

“Everything happened so quickly and within 10 minutes, my shop was flooded,” she said.

“This is the worst flooding I have experienced in over four decades. 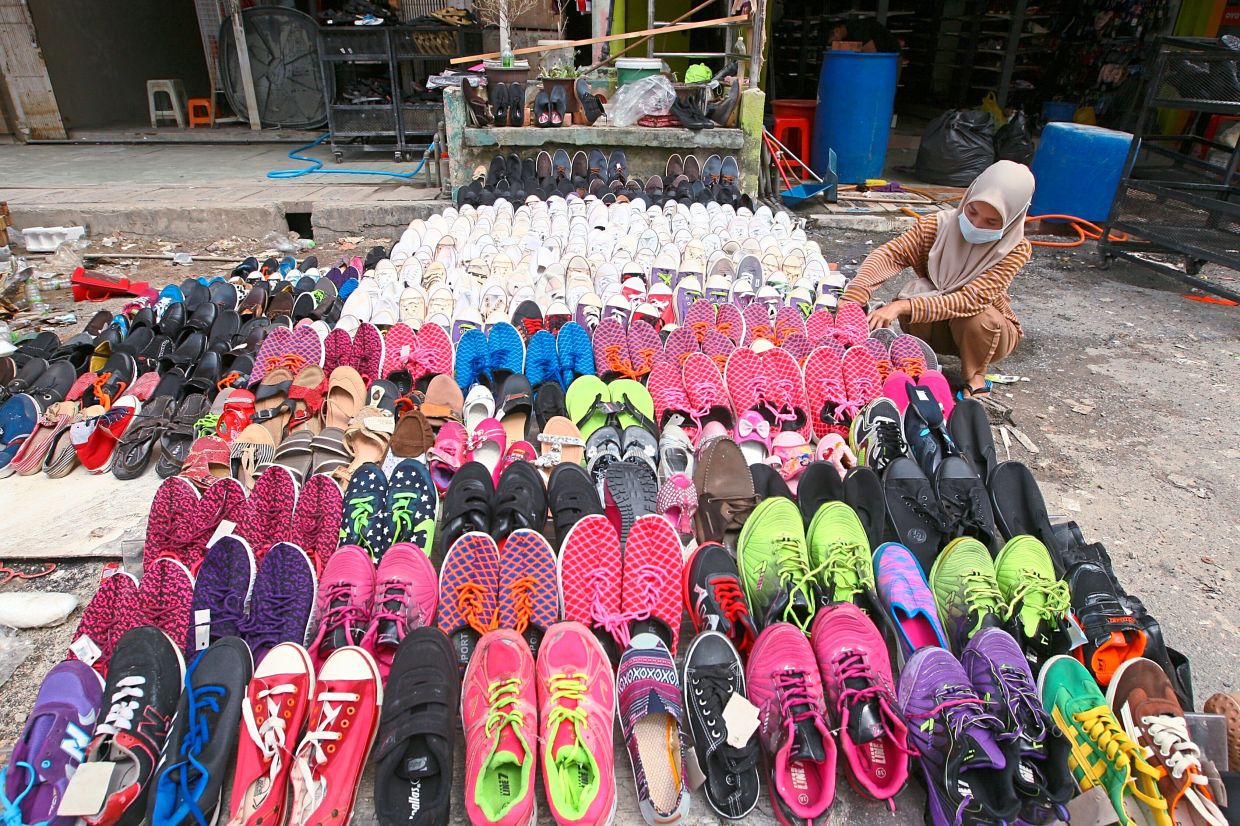 Saving what they can: A shop worker drying shoes that were soaked in the flood in Taman Sri Muda, Shah Alam.

“We bought fire and theft insurance but did not expect such a severe flood to occur,” she said.

“Our dry items such as rice, sugar and oil were all soaked in water.

“We are still cleaning up and it is going to take quite a while as we have to dispose of a lot of stuff,” she added.

Restaurant owner Abdullah Bakar has no words to describe how devastating it was to see his restaurant submerged in water in the massive flood that hit Shah Alam.The owner of Salsabeel Restaurant, located in Section 33, said floodwater slowly filled up his restaurant starting Dec 17 (Friday) night.

“It is truly indescribable. Everything was damaged and I could not go to my restaurant until the following Monday,” he said when contacted yesterday.

Abdullah is among thousands of small business owners who are affected by the recent flood that hit parts of Selangor and the Klang Valley.

He estimated at least RM150,000 losses due to the damage to his restaurant.

“The tables, chairs, ice containers and cooking machines are all damaged. When we came to check, our cooking gas tank was floating. I have never experienced anything like this before,” said Abdullah, who sounded visibly upset.

He is currently still cleaning up his shop.

“I have eight workers and have been doing this business for about two years.

“I hope the government can give us some assistance to help us get back on our feet,” he said.

He hopes to reopen his shop soon once everything is settled.

“We are just trying our best to clean all the mess right now,” he added.

Floods triggered by days of continuous heavy rain between Dec 17 and 19 displaced more than 50,000 people across the country, including those in the Klang Valley.