Though 3D printing has been around for a while now – the first experiments into it started back in the 1980s – it’s only been in the last decade or so that it has caught the public’s eye.

What was once a niche hobby for techies to print out random knick-knacks has become a convenient means for people to make or procure custom parts for a variety of uses.

According to Benjamin Siew Wan Siong, he was inundated with requests to make all sorts of things during the movement control order (MCO) while everyone was confined at home. Siew shares that hardcore 3D printing aficionados can go so far as to build their machines from scratch. — RAJA FAISAL HISHAN/The Star

“People who bought cafe-grade coffee grinders to get their fix during Covid-19 ordered 3D-printed parts to modify them to manually expel leftover coffee grounds, which can gum up the mechanism.

“There were also housewives who took up baking and wanted custom cookie cutters in more complex shapes based on TV shows and cartoons to make their kids happy.

“We started moving into different categories of items that have both functional and cosmetic uses,” he said.

From his point of view, what draws most people to the hobby of additive manufacturing – another name for 3D printing – is how quickly it can turn concepts into reality due to its inherent customisability and relatively low cost.

Siew previously served as an aircraft engineer overseas, but as the aviation industry floundered during the pandemic, he started 3DExpress.my, which offers both 3D printing services and equipment.

Making for the mainstream

According to multimedia designer and enthusiast Sean Lee Xin Xian, the increasing accessibility of 3D printing has been a great boon for tinkerers like himself. 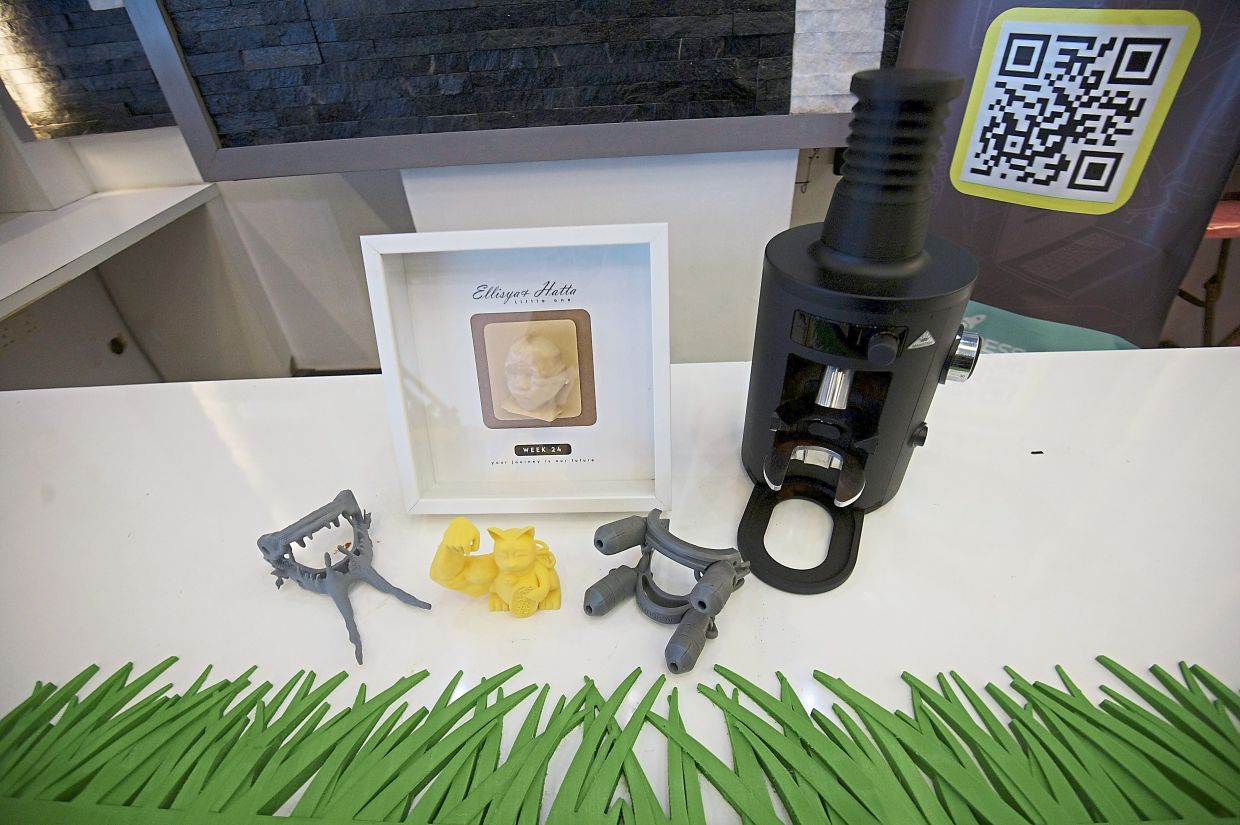 A 3D-printed shoe heel, coffee grinder with printed parts, 3D-print of a baby’s ultrasound scan, and various other figures made by Siew. — RAJA FAISAL HISHAN/The Star

“You can fabricate anything that comes to mind – broken parts for things you use every day, interesting-looking toys for fidgeting, and even pieces needed for a DIY project.

“In recent years, companies such as Creality have released home printers that provide decent print quality while remaining affordable.

“The most commonly used printing process is FDM, or fused deposition modelling. The cheapest full-featured FDM printer starts at RM800, though users are expected to know how to troubleshoot,” he said.

From Lee’s experience, the majority of 3D printers are not “plug-and-play” and will often require troubleshooting from time to time – that’s especially the case with budget models, which he uses. From Lee’s experience, the majority of 3D printers, especially budget models, are not ‘plug-and-play’, often requiring the user to be able to troubleshoot issues. — CHRISTOPHER FAM/The Star

Users have to get comfortable with ensuring that the printer bed is level, adjusting the printer belt, calibrating the stepper motors, removing filament build-up from clogged nozzles and tweaking the software, just to name a few.

Despite this, printers at this price point allow users to customise their units by replacing a variety of parts, like the motherboard and extruder, which can improve the quality of prints, he added.

Siew echoed the thought, saying that cost is no longer a barrier to entry, as affordable options are readily available.

“These days, you can get a 3D printer for less than a desktop or laptop, but cheaper printers may require modifications.

“However, assembling the printer can be a daunting task for a non-techy person, so reading up beforehand is a must.

“And if the printers break down, users need to know how to fix them on their own, since there are no services provided with the cheap consumer-grade printers,” he added.

There are plenty of resources just an online search or video away, said Siew, adding that the most hardcore 3D printing aficionados can go so far as to build their own machines from scratch by sourcing the parts themselves.

The complexity of the hardware isn’t the only thing keeping people away from 3D printing, with Lee pointing out that users will also need to have some degree of familiarity with the software side of things.

“If a user is looking to create something from scratch, they will need to know how to use 3D software to first design the object before figuring out how to set up the ‘slicer’ software,” he said.

The slicer essentially “cuts” the 3D object into thin layers and provides instructions to the printer on how to print each layer as well as stack and fuse them together. “Knowing the right setting for the slicer to determine the size and infill is important, and can vary depending on the complexity of the model,” he explained.

Those who just want a quick print without having to worry about the technical aspects can check out online communities and printing services.

“There are websites like Thingiverse where users share their designs – commonly in STL or OBJ file formats – for free or a fee.

“Platforms such as Fiverr also have people offering design services for those that need something completely custom, which can then be sent to a printing service like ours,” Siew explained.

Having options like these helps lower the barrier to entry for people who aren’t especially technical, giving everyone the chance to experiment and create, said Siew.

He also pointed out that there are plenty of free open-source resources when it comes to 3D printing.

The resources, including codes and designs, can be reused by others, allowing the community to build on top of existing creations and improve upon them.

According to Dr Iman Farshchi, an associate professor and dean of the Faculty of Engineering, Built Environment, and Information Technology at the Malaysian Allied Health Sciences Academy (Mahsa) University, 3D printing is becoming increasingly relevant across various industries. “Many factories and industries want a person with 3D printing and modelling knowledge, and this isn’t limited to factory-adjacent industries.

“You can see the use of it in the fields of medicine, biotechnology, and dentistry – even the crown for my tooth was 3D printed,” he said.

He went into more detail, saying that the fourth and fifth industrial revolutions (IR 4.0 and IR 5.0) are one of the main reasons why 3D printing is being used in different industries.

The industrial revolutions made “digitalisation commonplace”, he said, which made 3D printing particularly attractive as it allowed parts to be made in less time with less waste.

“We paid a visit to CREAM (Construction Research Institute of Malaysia), and it was making 3D-printed homes with giant printers and concrete that could complete building a house in just a month.

“I’m pretty sure that in the near future, most buildings will be 3D printed,” he said.

But it doesn’t stop there – according to Dr Lim Jing, chief technology officer of Osteopore, the firm is already using both 3D scanning and additive manufacturing to push forward the medical field. Lim says 3D-printed implants have the advantage of naturally degrading over time in the body unlike traditional metal parts. — Osteopore

“For patients suffering from bone loss or damage due to an accident of some kind, implants may be needed to help the bone tissue regenerate naturally.

“In the past, this was done with metal implants, which had to be removed after recovery to prevent infection or complications.

“However, the material used in 3D printing is biodegradable and can be safely left inside the body to degrade, eliminating the need for a surgeon to remove them later.

“The ability for us to design both off-the-shelf and custom implants depending on the needs of the patient to heal optimally is also a huge benefit, especially since it allows for the creation of much more intricate structures than traditional techniques,” he explained.

The medical world has also begun using the technology to plan and rehearse major surgeries in advance.

This is already happening in very complicated cases, for example, congenital heart disease in a baby.

With 3D printing, they can take an MRI or CT scan and use it to 3D print a detailed heart and inspect it so they know what to be aware of ahead of the surgery, he said.

And while not as high stakes compared with major surgery, fertility doctors are using ultrasound scans to create 3D prints of babies for their parents, according to Siew.

Efforts on the medical side of 3D printing are not limited to companies and manufacturers, with individuals like Sujana Mohd Rejab taking the initiative to create prosthetic limbs for children. “Going back to just 10 years ago, getting a prosthetic hand could take as long as an entire year due to the steps involved, while still incurring a very high cost.

“And those were not even for functional or practical use. Now we are looking at prosthetics equipped with robotics, which would cost the same as purely cosmetic ones,” he said.

He went on to say that 3D printing has made prosthetics more accessible to the public, with designs like his own available for free to anyone with a printer to make themselves.

Since the pandemic, Sujana has printed 13,000 face shields to support the efforts of frontliners and is now collaborating with IM Bionics to further develop and upgrade the design of his prosthetics to make an improved version.

Siew’s perspective is that the growing popularity of 3D printing will allow everyone to become a manufacturer of sorts, but like with everything, there are still concerns.

“Overseas, particularly in the United States, there are major concerns over weapons like ‘ghost guns’ made with 3D printers that are unregistered and thus untrackable.

“It was rumoured that the assassination of Japan’s former prime minister Shinzo Abe was done with a 3D-printed gun, which shows how much of a worry the topic has become even though it turned out to be a homemade gun instead of a 3D-printed one.

“This hasn’t become an issue locally. Printing services like ours will refuse to make items that resemble a real weapon, with some making sure to include an obvious orange tip for them,” he said. There are no local regulations specific to 3D printing, but if they are introduced in the future, Siew hopes that they won’t be implemented in a way that hinders advancement.

Lee, on the other hand, pointed out that dealing with waste materials generated by 3D printing is another area that needs attention.

“When a model is being 3D printed, the object may require supports to stand while being printed, which later have to be trimmed from the final product.

“These supports end up becoming extra plastic waste that you have to get rid of afterwards.

“For people like me with a recycling centre nearby, that’s not a big issue, but others may just dump it in the trash and it may end up in a landfill,” he said.

While there are initiatives to reuse the waste as filaments for printing, there aren’t any clear guidelines on what users should specifically do.

On top of that, multiple types of materials can be used for printing, but not all are safe.

For example, resin, which is used for printing more detailed objects, is stored in liquid form prior to printing and can cause irritation if it comes in contact with bare skin.

Resin also releases fumes that are toxic to humans during the curing process.

As for the user experience, Siew hopes for a better out-of-the-box experience for newcomers.

“With a regular inkjet or laser printer, all you have to do is take it out of the box and plug it in for everything to work.

“If the paper gets jammed or the ink runs out, the instructions on how to deal with it are readily available and intuitive – 3D printers need to get to this point.

“Because this technology isn’t for the future, it’s here right now. The only thing left to do is for people to become familiar with it, and adopt it for regular use,” Siew concluded.