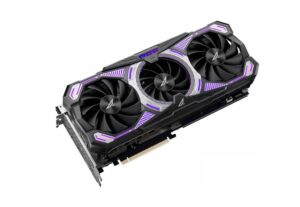 Zotac, like so many of NVIDIA’s AiB partners, recently launched a couple of custom-cooled variations of the GeForce RTX 3090 Ti. The first is the AMP Extreme Holo, which is the more widely available model and the one that the brand tends to seed out to reviewers and is a rather hefty card. Having said that, the brand did also launch a much larger version of the card: the PGF OC model.

Now, there are a couple of things to take note of the PGF OC model of this RTX 3090 Ti. Firstly and to repeat ourselves, it’s a massive card: compared to the AMP Extreme Holo, this is a 4-slot card, with a thickness of 73mm. For comparison, the AMP Extreme Holo variant – massive as it is – is a 3.5-slot card and has a thickness of 65mm. To that end, the card reportedly comes bundled with a VGA support bracket, primarily to prevent any sagging.

As one would expect as well, the PGF OC RTX 3090 Ti is also ravenous card. While NVIDIA lists the recommended PSU reference RTX 3090 Ti’s TDP as 850W, the card’s official specs sheet recommends that consumers have at least a 1000W PSU ready in their system.

In regards to the rest of the specifications, the PGF OC RTX 3090 Ti sports the same 24GB GDDR6X graphics memory, running at a frequency of 21Gbps, 10752 CUDA cores, and a 384-bit memory bus. Additionally, the boost clock of the card is rated at 1890MHz, with a 16-pin Microfit MOLEX PCIe power port, of which the card also comes bundled with a triple 8-pin PCIe power port to 16-pin adapter.

Again, the Zotac PGF OC RTX 3090 Ti is only available in China at the moment, with no word if the brand intends of making it more readily available to other markets outside of the region.