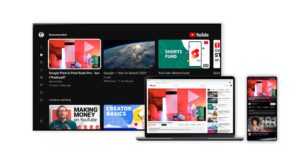 Back in August, we saw reports of YouTube testing a pinch-to-zoom feature for Premium users. It looks like the video hosting and streaming service has begun rolling the feature out to the general public. This comes alongside a genera redesign of the mobile app, as announced on the official blog.

As described in the previous report, this pinch-to-zoom feature allows you to zoom right in to specific spots of a video. This is not to be confused with just filling up screens bigger than 16:9. At the time, it was thought to be a Premium-only feature, but it’s good to know that it’s rolling out to everyone. Whether or not it’s an actually useful feature remains to be seen.

Beyond zooming into videos, precise seeking is also being rolled out. What this means is simply the addition of thumbnails when seeking, so you can get back to an exact part of the video without blindly rewinding.

other things being rolled out include what YouTube calls ambient mode. This makes it so that the background of the app adopts the general colour of the video being played. Playlists will also benefit from this ambient background colour change. Individual videos inside will also get more details, like upload date and number of views, judging from the provided screenshots.

Moving from the fancy ambient mode to the more basic dark theme, YouTube says the mode will be, well, darker. The theme will now feature more blacks than greys, rather than the other way around. This not only makes it look better, it may also lead to marginally better battery life. The Google subsidiary says that both of these colour-related changes will also be available on web, in addition to the mobile app. For dark theme specifically, it will also be rolling out to smart TVs.

All these new features begin rolling out today, and will reach users “over the next few weeks”. We haven’t seen the update take effect ourselves just yet, so we’ll have to take the company’s word for it.