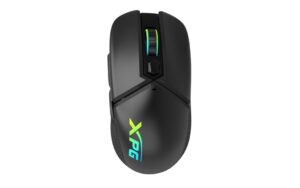 Gaming mice are usually made with a very specific use case in mind. That usually doesn’t involve being a storage device. But the XPG Vault looks to buck the trend by also being a 1TB SSD.

According to Digital Trends, XPG calls its Vault gaming mouse “your gaming library in the palm of your hand”. Quite literally, if you have a small amount of games to fit inside 1TB of storage space. It connects to your PC via USB-C, and is capable of transfer speeds of up to 985MB/s. There’s even a Gaming Launcher software to go with it.

All that being said, the Adata subsidiary did not make mention of the usual specs you’d expect to find with a gaming mouse. So no DPI or polling rate figures. Though from the looks of it, the XPG Vault looks to have at least five buttons, which are likely to be programmable.

The XPG Vault is part of the company’s CES 2022 lineup, which includes PCIe 5 SSDs and DDR5 RAM. And while those sound a lot more practical, and therefore likely to find its way on shelves at some point, it remains to be seen if the SSD gaming mouse combo will also be something that gamers can buy. Incidentally, the company also has a more standard wireless gaming mouse in the form of the XPG Alpha.

The post XPG Vault Is A Gaming Mouse With An SSD Inside appeared first on Lowyat.NET.