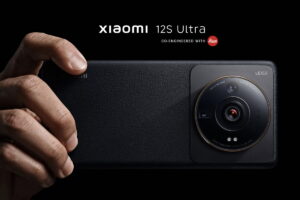 Almost two months after their partnership was revealed to the world, Xiaomi and Leica have officially launched the first group of devices to carry both of their brandings. One of them is the Xiaomi 12S Ultra which features a rather gigantic camera with Leica Summicron label on its back.

Xiaomi said that the 8P aspheric lens on the 12S Ultra’s main camera was designed to overcome a number of common issues that were faced by photographers such as flare, ghosting, and chromatic aberration. Furthermore, its main camera also utilizes a massive one-inch Sony IMX989 sensor that has a native resolution of 50.3MP although the output would be reduced to 12.5MP through the pixel binning process that is meant to help improve low-light output.

Aside from that, the phone’s 128-degree ultra-wide camera also features a substantially-sized 48MP Sony IMX586 sensor which measures at 0.5-inch. Not only that, Xiaomi also provides another IMX586 sensor for the phone’s 120x periscope telephoto camera while there is also a 32MP RGBW selfie camera on the top centre part of the 12S Ultra’s screen.

Speaking about its screen, the 12S Ultra comes with a 6.73-inch AMOLED display panel that Xiaomi has sourced from Samsung. The panel has a native resolution of 3200 x 1440 alongside adaptive refresh rate capability that maxed out at 120Hz and 1500nits peak brightness together with support for Dolby Vision, HDR10+, HDR10, and HLG standards.

With a thickness of 9.06mm and weighing 225 grams, the 12S Ultra is running on the Qualcomm Snapdragon 8+ Gen 1 that apparently able to provide up to 10% of improvements in terms of performance while consuming 30% less power at the same time. In addition to that, the IP68-rated phone can be obtained with up to 12GB of LPDDR5-6400 RAM and 512GB of UFS 3.1-based internal storage.

When it comes to sound, Xiaomi once again turned to its partner Harman Kardon to tune the symmetrical stereo speakers on the 12S Ultra. As you may expect, Dolby Atmos is a standard on this flagship phone as well.

Completing its general specifications is a 4860mAh battery which supports wired chargers with ratings as high as 67W together with up to 50W wireless charging. The 12S Ultra is also able to perform reverse wireless charging with a power output of up to 10W.

Xiaomi noted that these fast-charging capabilities are handled by the Surge P1 chip which the company has previously used for the 12 Pro that was released back in December 2021. On the other hand, the 12S Ultra also has another dedicated processor called Surge G1 that acts as its battery management chip.

As interesting as the 12S Ultra may be, the phone together with other Xiaomi 12S Series models will only be released in China. That being said, Xiaomi insisted that its partnership with Leica will have a long-term impact that goes beyond the 12S Series and will cover Xiaomi’s international markets as well.

The post Xiaomi 12S Ultra Now Official: Features A Huge Leica Camera On Its Back appeared first on Lowyat.NET.