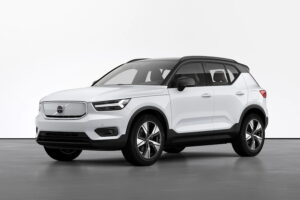 Even though the company has launched this particular SUV in Malaysia last month, it is only today that Volvo Car Malaysia (VCM) has officially revealed the pricing for the XC40 Recharge Pure Electric. The new model also has the honour as the first locally assembled EV in Malaysia.

Also known as the P8 Recharge, the Malaysian variant comes with a 300kWh dual-motor all-wheel-drive setup that delivers maximum power of 408 PS alongside 660Nm of torque. According to the official specs sheet, the SUV has a top speed of 180km/h and can accelerate from 0 to 100km/h in just 4.9 seconds.

Also comes standard with one pedal drive capability and a 78kWh battery, the XC40 Recharge Pure Electric has a maximum driving range of 418km under the WLTP standard. When it comes to charging speed, the SUV takes around 34 hours to be fully charged from 0% when charged using the standard home 3-pin plug.

The charging time could be reduced by using the Type 2 charging connector at 11 hours and 7 hours when plugged into a 1-phase 7kw and 3-phase 22kW AC charger, respectively. As for DC charging time via the CC2 connector, a 50kW rapid charger can bring up its battery level from 10% to 80% in 68 minutes while a 150kW charger can reduce the charging time to just 37 minutes.

As per what you may expect from a Volvo vehicle, the company has implemented plenty of safety features into the XC40 Recharge Pure Electric. Among them includes Collision Avoidance & Mitigation Support against other vehicles, pedestrians, cyclists, and large animals as well as Run-Off Road Mitigation, Blind Spot Information System, Lane Keeping Aid, Driver Alert Control, and 360-degrees camera.

Volvo has also equipped the SUV with a 9-inch touchscreen infotainment system that is powered by the Android Automotive operative system. Hence, it features deep integration with Google Maps alongside support for voice commands through Google Assistant and users also have the ability to download additional apps from Google Play.

Drivers are also being provided with a 12.3-inch fully-digital driver information display while a 13-speaker Harman Kardon audio system with a 600W amplifier helps keep everyone entertained when they are cruising around with the XC40 Recharge Pure Electric.

On top of that, customers will also be provided with a 5-year Roadside Assistance package and a charging cable. VCM said that customers can expect the deliveries of the XC40 Recharge Pure Electric to take place starting from the end of April onwards.

In many ways, today’s announcement is yet another positive development for the rapidly growing EV scene in Malaysia which has just received the Hyundai IONIQ 5 and Mercedes EQA last month. Previously, the national car market Proton has agreed to bring over EVs from the fellow Geely Holding member, smart to Malaysia and Thailand soon while Fieldman Group is planning to build a plant in Melaka to assemble EVs from Changan Automobile.