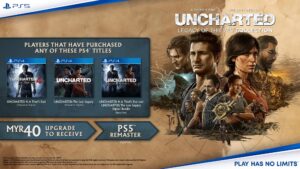 Uncharted: Legacy of Thieves Collection was first announced back in September. It would be released on the PS5 and PC, but there were no release dates, until now. On the official blog, PlayStation has announced that it will be first coming to the PS5 on 28 January.

The blog post also outlines some of the improvements that you can expect from the Uncharted: Legacy of Thieves Collection. As with most PS5 games these days, you get a choice of Fidelity Mode or Performance Mode. The former prioritises 4K resolution at the cost of locking frames to 30fps. The latter does the opposite, locking frames at 60fps at the cost of resolution. Then there’s Performance Plus Mode, locking resolution at Full HD, but gives you 120fps.

As mentioned, the Collection will be available on 28 January. As for its price, it’s pegged at RM209. It’s also worth noting that if you’re looking to get their standalone component games for the PS4, they’re not available digitally anymore. Now, you can only get them bundled, much like the collection itself, but for the price of RM169.

Despite all these details, there’s no details as to when the Uncharted: Legacy of Thieves Collection will be released on PC. All that Sony Interactive Entertainment has to say is that more details will be revealed later.