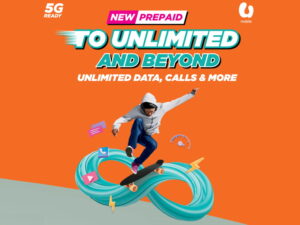 U Mobile today has announced its new Unlimited Prepaid plans which as you may be able to guess from the name, offers virtually unlimited data quota. The reason why we said “virtually” is because these plans do come with some ceiling limit as specified by their Fair Usage Policy (FUP).

This is a rather interesting point because the telco didn’t reveal the actual FUP limit for the older Giler Unlimited prepaid plans. After all, the Malaysian Communications and Multimedia Commission (MCMC) has told telcos last year to clearly specify the FUP details of their plans.

The U25 plan which is currently being offered at RM20 per month has a maximum speed of 3Mbps and a FUP limit of 30GB. On the other hand, those who need faster speed can opt for the U35 plan at RM35 per month which runs at up to 6Mbps and has an ultimate FUP limit of 100GB.

Once users reached the respective FUP, their speed will be limited to 512Kbps although there is no usage quota for browsing under throttled conditions. Meanwhile, there is no hotspot allocation for the U25 plan though while the U35 has been provided with a 3GB quota for hotspot connection which can only be activated through smartphones.

Another new interesting feature of these new U Mobile Unlimited Prepaid plans is that customers are also being provided with a 1-hour Speed Boost that they can redeem through the MyUMobile app on a daily basis. Once activated, the 3Mbps and 6Mbps speed cap would be removed for an hour although their usage is still bound to the FUP limit.

Meanwhile, do note that U Mobile will throttle peer-to-peer (P2P) usage down to 64kbps. U Mobile also said that these new plans are 5G ready but at the moment, the telco have yet to obtain access to the national 5G network as they are waiting for the government’s ultimatum regarding the Single or Dual Wholesale Networks issue.

When it comes to phone calls, both of these new U Mobile Unlimited Prepaid plans also feature unlimited call quota as standard. For further details, head on to U Mobile’s website right here and as always, we do recommend you to thoroughly read and understand all the terms and conditions of any telco plans before you sign up.

The post U Mobile New Prepaid Plans Offer Unlimited Quota For As Low As RM20 appeared first on Lowyat.NET.