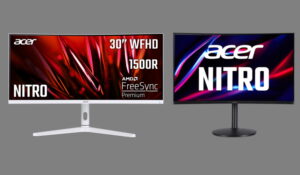 Alongside the Predator X28, Acer Malaysia has also recently launched two other gaming monitors in our market. As opposed to the flat form factor that the X28 has, these models, which belonged to the company’s Nitro series, are curved monitors.

On other hand, there is also the 29.5-inch Nitro XZ306C X which also offers 1500R curvature and VA panel but has an ultra-wide 21:9 aspect ratio and 2560 x 1080 resolution instead. This AMD FreeSync Premium monitor can deliver up to a 200Hz refresh rate via its DisplayPort.

Aside from their aspect ratio, another way to differentiate these new Nitro curved gaming monitors is their colourways. While the EI322QUR P comes in black which is the traditional paint job for Nitro products, the XZ306C X is draped in white instead.

Being part of the Nitro family, these curved gaming monitors come with a much lower price tag than their Predator cousins. Readily available through Acer Malaysia’s eStore and authorised retailers all over the country, it is interesting to see that both EI322QUR P and XZ306C X are actually priced at RM1,299 each.

If you are planning to get your hands on either of them by the end of this month, do note that you are entitled to Touch ‘n Go eWallet credit worth RM50 through the ongoing Sinar Raya with Acer campaign. So, don’t forget to claim it via the campaign’s official website right here.