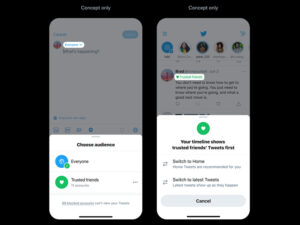 New details have emerged regarding Twitter Flock, the social media company’s rebrand of its “Trusted Friends” feature that was previewed last year. The feature aims to allow users to limit the visibility of their tweets to a small group of people that they trust, similar to Instagram’s Close Friends feature.

Reverse engineer Alessandro Paluzzi discovered the feature last month, but has managed to uncover even more details on how it works. According to a screenshot he posted, you will be able to add up to 150 users to your “flock”, who will gain exclusive permission to view and reply to your Flock tweets. A teardown by XDA Developer found strings in Twitter’s 9.27.0-beta.2 Android app that refers to the feature, which corroborates Paluzzi’s findings.

You will also be able to remove people at any time from your inner circle and they will not be notified. Additionally, it seems that users will be able to set tweets from trusted friends as a priority on their timeline, rather than a chronological setting.

Twitter Flock seems to be an extension of another privacy feature that lets users choose who can reply to their tweets. While that limited potential for abuse, tweets were still publicly visible whereas Flock will make selected tweets completely private. The feature is still under development, and there is no word from Twitter on when we might see it rolled out widely.