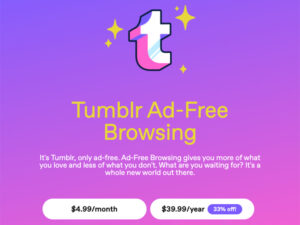 Tumblr has just launched a new subscription for users that want to get rid of advertisements on its platform. The microblogging site first put up ads back in 2012 even though the site’s founder David Karp said in 2010 that Tumblr was “pretty opposed to advertising,”.

The ad-free subscription plan costs US$4.99 (~RM21) per month or US$39.99 (~RM168) per year. Once you have opted in, you can get ad-free browsing on both its desktop site and mobile app, but the payment can only be done through desktop for now as Tumblr says it’s still working on the checkout process for iOS and Android.

Keep in mind though, the company said that even with the subscription, you’ll still see sponsored posts from creators, as well as logo takeovers. It’s the same way as to how YouTube Premium can’t stop its creators from making sponsored videos.

The ad-free browsing package comes not long after Tumblr added monetisation tools for popular bloggers, such as the Post+ subscriptions and the ability for users to tip their favourite blogs. Twitter has a similar paid subscription called Twitter Blue that gives access to exclusive features but lacks ad removal, but then again, it only costs a fraction of Tumblr’s.