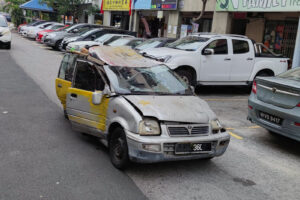 Transport Minister Wee Ka Siong has turned down a proposal to implement a 10-year vehicle age limit on vehicles. He said that it was a complex matter that requires understanding and research, pointing instead to a solution that involves public transport.

According to the minister, the country must first provide a complete public transport system before it can put into place such a system for vehicles. He pointed out that the country is currently building out various projects, such as the MRT initiative which just launched the first phase of the Putrajaya line and is planning a third line to be completed by 2030.

This issue stemmed from an academic who claimed that the cause of ongoing traffic congestion issues is that the number of registered vehicles has now outnumbered the country’s population. However, the claim was debunked by a former transport minister who said the figure included old vehicles from British colonial times.

A report citing a Road Transport Department (JPJ) document then claimed that there are actually around 21.7 million registered vehicles currently active, with more than 10 million being dormant. Apparently, the figures are complicated because Malaysia does not practice an end-of-life policy where dormant cars are given a “death” certificate. The department instead uses a formula where there is an assumed 10% reduction annually.

Last week, a group of researchers from Universiti Kebangsaan Malaysia (UKM) proposed that vehicles be scrapped after 10 years to reduce the number of cars on the road and lower the carbon footprint of older vehicles. Wee said that while he understands where the researchers are coming from, he worried that such a policy would be unfair to those living in villages who can’t afford to buy new cars every ten years.

“Even my late father was driving a 20-year-old vehicle,” said the transport minister. He reiterated that there is more than one way to tackle the problem and that it must be dealt with holistically. Wee added that some inactive registered vehicles are kept by the owners for sentimental reasons.