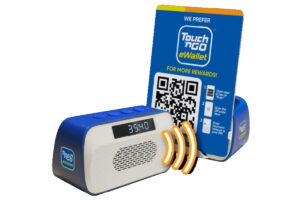 While there might not be many of them around, Touch ‘n Go does produce several derivative products over the years. Unlike the newly released NFC charm which was hotly received by consumers and sold out almost immediately, this TNG eWallet Soundbox is not meant for them though.

Instead, it is being designed for merchants out there that want to add an audio element to their Point-of-Sales setup. This is because the TNG eWallet Soundbox is designed to emit an audio notification whenever a payment has successfully gone through to the merchant.

This way merchants don’t have to manually check their app to verify the payment made by their customers. Perhaps, this brief video demo provides a clearer picture of the device’s main purpose:

Even though the Soundbox is a TNG eWallet-branded device, the company said that it can generally support any payment platform out there that utilizes DuitNow QR. That being said, we don’t know how the notification would sound like if a customer made a payment using other e-wallets.

While this may sound rather odd to some out there, the Soundbox is not able to announce failed or pending transactions although it can playback the previous transaction. Since it is meant to support digital payment, the device needs to be connected online either using its built-in mobile network capability or through a Wi-Fi network and each unit has been mapped to the merchant’s specific business QR.

Meanwhile, merchants can choose to obtain the device with a dedicated SIM card which has a standard subscription period of 12 months or as a standalone device. Price-wise, the Soundbox with SIM Card bundle costs RM139.50 while the standalone unit goes for RM59.50.

Merchants that are interested to get their hands on the new TNG eWallet Soundbox can do so via their Merchant Dashboard inside the TNG eWallet app. Do note that there are only 500 units available for purchase at the moment, so you may want to act quickly if you planning to utilise it for your premise.