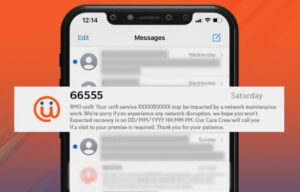 TM is currently performing maintenance and upgrading works on its network infrastructure throughout Malaysia. According to a recent post on unifi’s Facebook and Twitter pages, this operation is being done in order to ensure the company’s network is “faster and more stable,”.

However, TM did not provide any in-depth details regarding this endeavour though including its duration. We went high and low through unifi’s website to seek further information about it but came out empty-handed and we are now reaching out directly to the company for clarification.

That being said though, TM has noted in the social post that it will notify customers through SMS if the maintenance or upgrade works affected their area. Interesting enough, the company is still sticking to its 24 hours service restoration guarantee for this operation.

Originally announced last November, customers would receive a rebate of RM50 for their bills if TM failed to restore their service within 24 hours. However, this guarantee is only available for unifi customers with a 100Mbps plan and above.

Around 5.7 million households have been covered by the end of 2021, according to him. In the same blog post, Tajul further added that the company has deployed one million new ports last year.

On a related note, TM has also begun to provide a free Wi-Fi 6 router to customers with a 100Mbps fibre plan. First reported by Amanz, such routers were previously provided only for those with a 300Mbps plan and above since last December.

Aside from the listing on unifi’s website, the latest FAQ document for the Wi-Fi 6 router dated 22 June [pdf] has also been updated to reflect the inclusion of the 100Mbps plan. It also said that the router is subjected to a 12-month warranty and should not have any problem working with the customers’ existing TP-Link Deco Mesh Wi-Fi system if they have it at their home.