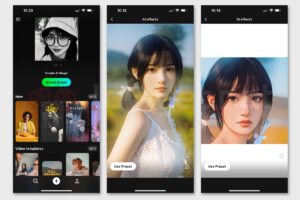 Selfie-enthusiasts rejoice, as a new image editing app and filter has suddenly taken social media by storm. Similar to FaceApp and Voilà AI Artist prior to this, the app known as Prequel also uses AI to enhance your selfies, in this case, into a graphic novel-worthy artwork.

The filter itself is unimaginatively called “Cartoon”, which is also among plenty of other effects that are offered by Prequel for both photo and even video editing. Upon selecting or snapping a selfie via the app, the filter will take a short time to process it into the desired effect.

And the outcome is actually pretty amazing, really. So much so that the portraits look like they were created by a professional artist – just expect a couple of features to be exaggerated, namely the eyes and lips. Below are several examples shared by LadyLessien on Twitter.

Nobody is safe from the prequel cartoon filter!

But before you have yourself a bit of fun with Prequel, do keep in mind that most of the work is done in the cloud rather than on your device – again, much like the other two apps that we mentioned earlier. What this means is that all of your selfies will be uploaded to the app’s servers, which may cause concern to privacy conscious users.

Prequel Inc, the app’s developer, did not specify in their privacy policy page on what it does with the images after they are uploaded and processed. On that note, the company says it does collect data such as location and device location when you’re using the app, provided that you’ve given permission for it to do so. “This information is useful to us for troubleshooting and helps us understand usage trends and improve and optimise [our services] and your user experience,” the developer said in the page, which you can view via this link.

Oops my hand slipped on the prequel app pic.twitter.com/9OqDl0Vcry

While the app is free to use and no registration is required, it does sneak in a screen-filling advertisement from time to time in order to promote its premium services. In that regard, just tap the “X” button on the upper left corner to close the ad and use Prequel’s editing features. Subscribing, on the other hand, will unlock all effects, filters and beauty tools as well as remove the app’s watermark from edited images and videos. Prequel is available for both Android and iOS devices.

The post This New Image Editing App Has Been Making Waves In Social Media appeared first on Lowyat.NET.