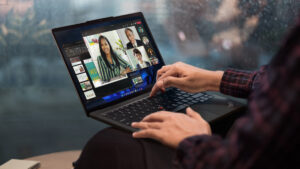 Alongside several other new devices launched during MWC 2022 in Barcelona, Lenovo also unveiled its new ThinkPad X13s laptop. What is unique about this particular model is that it is the very first ThinkPad model to feature Qualcomm’s latest Snapdragon chip for mobile PCs.

To be specific, the Lenovo ThinkPad X13s is equipped with the Snapdragon 8cx Gen 3 – a processor built on the 5nm process, which offers 85% improved performance over its predecessors, up to 60% better graphics acceleration via its built-in Adreno GPU, and up to 60% per-watt performance improvement over x86 chips. Paired together with the chip are memory configurations consisting of up to 32GB RAM and up to 1TB PCIe of internal storage.

The laptop itself sports a 13.3-inch WUXGA IPS display with 16:10 aspect ratio, which is also offered as a touchscreen variant, or a low power and low blue light 400-nit option. Besides that, the ThinkPad X13s comes with Lenovo’s iconic TrackPoint nub on its keyboard; a 5MP webcam with optional IR sensor, RGB, or Computer Vision features; two USB-C 3.2 Gen 2 ports; Bluetooth 5.2 and up to Wi-FI 6E connectivity; optional 5G support; and Windows 11 Pro out of the box. As for battery, Lenovo claims that the laptop is able to last up to an impressive 28 hours of usage on a single charge.

The Lenovo ThinkPad X13s is also aimed to be the more affordable option from the series, coming in at EUR 1,399 (~RM 6,576). It is slated to ship out in Europe in May 2022, while the US will only receive it much later in the year. Lenovo says more details on the laptop’s local specifications, availability, and retail price will be announced at a later date.