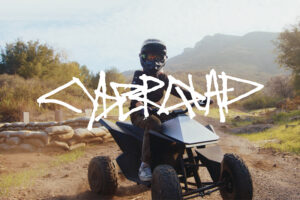 Tesla has started selling an all-electric mini Cyberquad ATV meant for kids, so that they can flex about owning a Tesla at an early age. It costs US$1900 (~RM8037) and will start shipping in two to four weeks, but it can only be bought in the US.

It’s designed for ages 8 and up, with a maximum weight capacity of 68kg, so it might even be rideable for small adults. For safety, the speed settings are limited to 8 and 16 km/h, and also allows for reverse speed of 8 km/h.

The Cyberquad for Kids has a range of up to 24km, but varies according to the rider’s weight, speed setting, and the terrain. According to Tesla’s FAQ, it will take about five hours to completely charge using the included wall charger and some assembly will be required.

While this smaller Cyberquad is shipping out as early as this month, there’s still no word on when the full-sized ATV is going to be released. The original Cyberquad was announced in 2019 as a companion to the Cybertruck, which was originally slated for production in late 2021, but has since been pushed back to 2022.