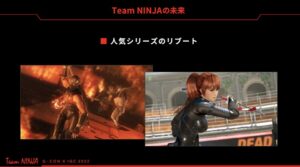 Though famed for its difficulty, the Ninja Gaiden series has been dormant for the better part of a decade, with the last mainline entry released back in 2012. As for the Dead or Alive series, the last entry came it more recently in 2019, but it’s doesn’t exactly have any major impact in the 3D fighting games scene. All that being said, there’s a chance for change, as the developer of both, Team Ninja, a subsidiary of Koei Tecmo, has hinted at a reboot for both.

During a panel at the annual G-Star trade show in Busan, South Korea, the developer showed a slide featuring both series, with the text “reboot of popular series” written in Japanese. According to Korean community site Ruliweb, Fumihiko Yasuda, president of Team Ninja, said that he wants to share more to fans as soon as possible.

On one hand, a reboot of Ninja Gaiden makes sense, considering the gap between now and the last entry in the series. Equally viable is a sequel to the events of Ninja Gaiden 3, though one can imagine the difficulty of coming up with a plot of grander scale than that. But on the flip side, it’s a little odd to see Dead or Alive getting the reboot treatment, considering it has only been three years since the last game, and plot is not necessarily the most important point of fighting games, least of all the Dead or Alive series.

At any rate, the reveal of a potential reboot comes at the very end of a long talk, and seems to be a tiny part of the entire panel. The studio’s most recently announced title, Wo Long: Fallen Dynasty, gets mentioned a lot, but no new details have been revealed otherwise. If you choose to do so, you can read the report for yourself by hitting the link below.

The post Team Ninja May Be Working On Reboots For Ninja Gaiden, Dead Or Alive appeared first on Lowyat.NET.