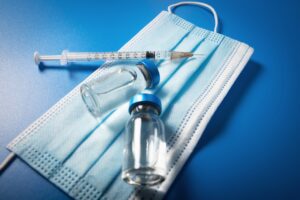 South Korea has announced that it will be giving out a fourth dose of the COVID-19 vaccine by the end of February to high-risk groups. This comes as the country is reeling from a massive surge of infections caused by the Omicron variant.

The fourth jab will act as a second booster for those who live or work in nursing homes and care facilities, as well as those with a weak immune system that number 500,000 and 1.3 million respectively. South Korea has been reporting five-figure daily cases since late January, and on Saturday, the East Asian country hit an all-time high of 56,425.

Amid the Omicron wave, authorities had restricted free PCR tests to only the vulnerable group, as well as limit the number of home kits to five per person at a single location to prevent hoarding. Health Minister Kwon Deok-cheol said that the government will provide 190 million self-test kits next month to dispel concerns of a shortage.

The UK, Israel, France, Spain, Denmark, and the US have similarly approved a fourth jab for high-risk groups, with Israel and France currently mulling on making the extra dose available to all adults. As for Malaysia, the Ministry of Health is currently studying the need for a second COVID-19 booster for Sinovac recipients, although Health Minister Khairy Jamaluddin said that it was still too early to come to a conclusion.

The post South Korea To Roll Out Fourth Dose Of COVID-19 Vaccine By Month-End appeared first on Lowyat.NET.