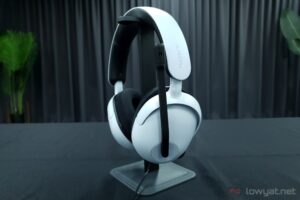 The Sony Inzone series has been quite the head-scratcher ever since it leaked all those months ago. These are gaming-focused items and even go so far as having designs that are very reminiscent of the PS5, but they don’t bear the PlayStation branding. Perhaps this is because its parent company want these peripherals to be independent of its own gaming subbrand, all so it can gain a bigger piece of the PC gaming pie as well.

Whatever the real reason may be, the fact remains that Sony now has its own line of gaming products independent of its own PlayStation subsidiary. Which leads us to the Sony Inzone H3 gaming headset, the entry-level model of the bunch. The company has passed us one for review, which brings us to this article you’re currently reading.

As mentioned, the Sony Inzone H3 is the entry-level model of a trio of gaming headset series. Also as mentioned, despite the apparent dissociation with PlayStation, the colours on the headset, and perhaps the aesthetics as well, tell a very different story. The entire line matches the black and white colour scheme of the PS5, the only thing missing from the outset – specifically the H3 and H7 models – being the blue lights.

Colours aside, the headset is overall very round. The earcups come in a sort of stadium-esque ovoid shape, the arms are an arched tube with the headband itself being a sort of curved half-pipe shape. The left cup is where you can find the volume wheel, also housed in its own hemispherical structure. Also on the left cup is the built-in boom microphone, which is possibly the structure on the headset with the most angles and corners. Unlike the higher-tiered headsets in the series, the Sony Inzone H3 operates solely through the attached 3.5mm audio cable, which is also on the left cup. Though the company does provide a USB adaptor if that’s what you prefer.

On the inside of each earcup is memory foam wrapped in fabric. It’s not uncomfortable by any means, but being fabric means bad news when hot weather strikes. The headband defaults to faux leather, which is usually the way to go, even among other headphones using fabric for the earcups.

Overall, the Sony Inzone H3 is pretty light, so it’s pretty comfortable to wear for extended periods of time. The pinch does set in after a few hours, but the sweat buildup will probably be the thing that compels you to take it off first. This can somewhat be alleviated with the adjustable headphone arm, which I have a new appreciation for after reviewing the Sony Pulse 3D gaming headset.

The swivelling boom microphone is also convenient, in that it mutes itself when you push it up, and only works when you pull it down to your mouth. Mic monitoring is also present, which is always a feature I miss when it’s inexplicably missing from some headsets.

The mic also does noise-cancelling on its own to a certain degree, as the mic monitoring doesn’t pick up the usual wind buffeting from my table fan. This means that a makeshift pop filter is unnecessary, which is not a common experience for me when it comes to headsets with boom mics.

The Sound Quality. Talk To Me.

These days, it will probably be a challenge to sell gaming headsets if they didn’t have spatial audio support of some kind. And for the Sony Inzone H3, this is the one thing it does very well. With Horizon Forbidden West on the PS5, this really helps to immerse me into the locale. Be it tree leaves rustling in the wind or the flow of a nearby river, you can easily tell where each sound is coming from.

On PC, playing The Division 2 with this gaming headset means being able to hear quite precisely where gunshots are coming from. This is especially useful for identifying rushers, especially with the game amplifying their footsteps.

While the spatial audio of the Sony Inzone H3 is superb, the same unfortunately can’t be said about audio quality when listening to music. For its price, the H3 produces decent sounds, allowing you to hear both treble and bass with relative clarity. While that’s a flattering description for treble, I should mention that that’s not quite enough for bass; with bass-heavy tracks, you’d want to feel it to a certain extent, rather than just hear it.

The output quality of the microphone is a bit of a mixed bag. Because it has a dedicated boom mic, my voice goes to my friends louder than, say, a headset that uses beamforming mics. This also means more consistency, and your voice doesn’t get randomly cut off because the beamforming mic mistakes your voice for ambient noise. But on the flip side, actual sound quality – or more specifically, clarity – takes a hit.

Due to the fact that the earcup memory foam is wrapped in fabric, noise isolation is not the best. So while your office neighbour won’t necessarily hear you blowing your eardrums out with your favourite tunes, you’ll definitely hear the occasional chatter or laughter going on. In a home setting, this means that no one can hear your game, but you’ll definitely hear if someone in the same room has Netflix on without headphones.

If you can afford to spend money to get a pair of headphones specifically for music, and another dedicated headset, then sure, The Sony Inzone H3 is a candidate. If not, then you’re making a lot of sacrifices.

At RM439, it is only slightly more affordable than the Sony Pulse 3D wireless headset, though it does lose out on the inherent PS5 integration. Beyond that, and the fact that the H3 is wired-only, the two are simply additional choices in a sea of options. Comparing just the two though, the Sony Inzone H3 performs better as a gaming headset, but not as well for general music consumption.

The post Sony Inzone H3 Lightning Review: In A Zone Of Its Own appeared first on Lowyat.NET.