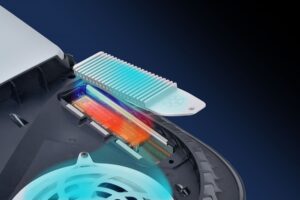 Sony Interactive Entertainment has unlocked the SSD slot on the PS5 in September last year. But while you are free to use any M.2 PCIe 4.0 SSD that fits, getting one that’s built with a heatsink is usually the optimal way to go. But if you already have a compatible drive without a heatsink, then you can get a special cover for the SSD slot on the PS5 that serves as one instead.

SilverStone has the TP06 PS5 M.2 SSD heatsink cover, which is meant to replace the default cover for the PS5 expansion slot cover. Where the original cover is a flat piece of metal, the TP06 has the kind of ridges that you’d expect to see on a PC component. It’s also made of aluminium for better heat dissipation.

The PS5 console itself remains something that’s highly sought after. But if you do have one, you’ll probably want to install an M.2 SSD since the internal storage isn’t exactly spacious. This TP06 SSD cover would make that easier, as you’re not limited to getting something that comes with a heatsink.

And that would probably be the better thing to do, compared to the alternative of frequently deleting and redownloading games. Since SSDs’ lifespan is measured in read/write cycles, the more often you delete and download stuff, the quicker it fails.

The post SilverStone Has A PS5 SSD Heatsink Cover appeared first on Lowyat.NET.