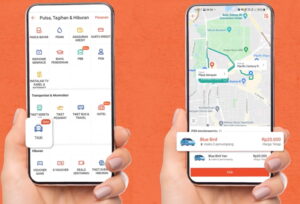 Shopee seems to be dipping its toes into the e-hailing business in Indonesia, with the help of Indonesian taxicab firm Bluebird Group. The feature allows users to hail taxi rides straight from the Shopee app.

The Blue Bird e-hailing feature on Shopee has two types of vehicles at the moment: including the regular Blue Bird taxi and Blue Bird Van for bigger groups. Interesting enough, customers can actually use Shopee Coins to offset the price of their taxi rides.

This isn’t the first time that Shopee and Bluebird have collaborated together. Earlier this year, Bluebird integrated Shopeepay into the MyBlueBird app as a payment method and in turn, Shopee added Bluebird’s logistics service, BirdKirim, into its app so users can send and receive parcels on demand.

The ride-hailing market in Indonesia is forecasted to be worth US$5.6 billion (~RM23.6 billion) by 2025, which is currently dominated by two companies: the regional giant, Grab as well as the hometown unicorn, Gojek. However, Grab who recently went public in the US, holds a bigger piece of the pie at 52% of the e-hailing market, while local firm Gojek holds 48%.

Meanwhile, it is not known at the moment if Shopee will roll out the ride-hailing feature in other markets. Given what just happened in Indonesia, we now at least know that the company at least has the technical capability to deliver ride-hailing service within its app.