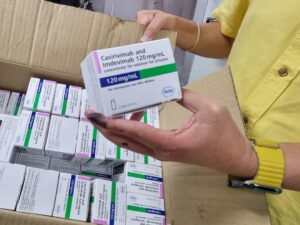 Sarawak Local Government and Housing Minister Dr Sim Kui Hian has revealed that the state government has managed to acquire Ronapreve, a COVID-19 treatment made by US biotechnology company Regeneron and sold by Swiss pharmaceutical firm Roche.

Sarawak is the first state to make a deal with Roche since it was given conditional approval by the National Pharmaceutical Regulatory Agency (NPRA) on 13 December. Dr Sim said that the Ministry of Health (MoH) allowed the state government to acquire Ronapreve ahead of the federal government, which has yet to purchase the medicine for other states, to be used in government hospitals in Sarawak.

Ronapreve is a monoclonal antibody cocktail made up of two drugs — casirivimab and imdevimab. It is administered through an injection and has been found to reduce the risk of death or hospitalisation by 70%. The combination is approved for medical use in Japan, the United Kingdom, the European Union, and Australia, and was famously used to treat then-US President Donald Trump in 2020 when he was infected with the virus.

According to Dr Sim, the treatment will be given to COVID-19 patients with severe symptoms in Category Four, although Health director-general Dr Noor Hisham previously said that it’s approval is for use on those who don’t require supplemental oxygen and are at risk of progressing to severe disease.

Meanwhile, MoH revealed plans to acquire several COVID-19 drugs prior to this. These include the molnupiravir antiviral pill as well as treatments being developed by Pfizer and AstraZeneca.