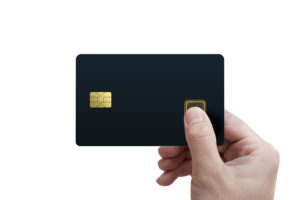 Samsung has unveiled its new fingerprint security integrated circuit (IC) which it claims to provide better security for card payments. Named S3B512C, the chip combines a fingerprint sensor, a tamper-proof Secure Element (SE) and Secure Processor into one, while previous designs separated the three components. The new card is said to reduce the number of chips required for manufacturers.

While it is mainly designed for payments, the chip could also be used for students, employees, memberships, or just general building access. It is EMVCo and Common Criteria Evaluation Assurance Level (CC EAL) 6+ certified and is compliant with Mastercard’s Biometric Evaluation Plan Summary (BEPS) specifications for biometric payment cards.

How it works is that when you are making a payment by either inserting your card into a terminal or tapping on it, the fingerprint sensor will take an image of your thumbprint and will match it to a digital template stored on the card. Samsung added that its technology has anti-spoofing features to prevent fraudulent transactions using artificial fingerprints.

Mastercard already has its own card with a fingerprint sensor, but it signed a deal with Samsung last year to use the latter’s technology to improve the security of biometric cards. The South Korean tech giant previously said that it would roll out a biometric card in its home country by the end of 2021, though that hasn’t seemed to materialise. On that note, it has yet to provide a timeline on when consumers can expect to utilise the new chip for card payments.

The post Samsung Made A More Secure Chip For Making Card Payments Using Your Fingerprint appeared first on Lowyat.NET.