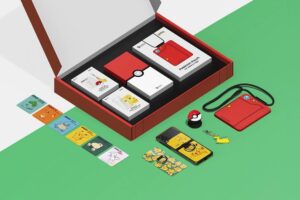 Pokemon as a franchise is, needless to say, popular. So it’s only natural that there are special editions of things with a skin of the franchise. We’ve seen plenty from Razer, for example. And now it looks like it’s the turn of Samsung, or more specifically, its Galaxy Z Flip3 foldable smartphone.

The special edition foldable phone comes with a lot of extras that the standard version doesn’t, and that’s not just the Pokemon skin. Naturally, there’s a lot of things with Pikachu specifically, like the picture case, clear cover, and key chain. Then there’s the Pokedex styled pouch with a lanyard strap, a Poke Ball stand, and an assortment of stickers featuring the original three starters, Snorlax, and Mew.

As with special editions, the Pokemon edition Samsung Galaxy Z Flip3 also comes with some exclusive items on the software side of things. These include themes, wallpapers and even ringtones. Not that you can’t get these any other way.

Samsung even has a dedicated site for the launch of this Pokemon special edition foldable smartphone. There’s a timer that’s counting down to 6PM of 24 April. This is presumably when the special edition phone will be launched in South Korea. But it also remains to be seen if this will be available anywhere else.