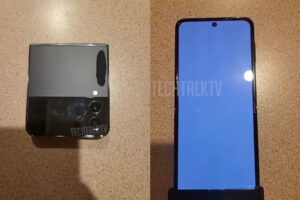 Last month, we got a peek of Samsung’s next-generation Galaxy Z Flip4 foldable when alleged 3D renders of the phone were leaked. Now, TechTalkTV has uploaded images of what it claims to be the real thing, showing a device that is largely the same as its predecessor with minor design improvements.

TechTalkTV posted images of a black variant Samsung Galaxy Z Flip4 on both Twitter and YouTube, but both posts have since been taken down. Unfolded, we can see that both halves of the flip phone are fitted with matte glass aside from the secondary display portion with the camera bumps.

On the side, there seems to be a side-mounted fingerprint sensor and we also get to see a glimpse of the phone’s hinge. There doesn’t seem to be any noticeable difference from the Z Flip3, except for maybe the gap between the two folded screens being a bit smaller.

What seems to be quite impressive though is the lack of a crease in the middle of the phone. If this leak is to be believed, Samsung has somehow achieved the goal of making a foldable screen with a near-invisible crease, which will hopefully also translate to a better experience on the Galaxy Z Fold4.

According to TechTalkTV’s source, the Z Flip4 is expected to come with the same 12MP primary and ultrawide sensors on the back and the same 10MP selfie camera. The source also claimed that it will have a bigger 3700mAh battery and faster 25W charging. A Geekbench database leak last month may also point at the phone being equipped with the Qualcomm Snapdragon 8 Gen 1+.

Samsung itself has not confirmed any details of the phone yet and is expected to announce both the Galaxy Z Flip4 and Z Fold4 in August. If the rumours prove to be true and the flip phone does not come with any major updates, the price is expected to be similar to the Z Flip3 at US$999 (~RM4,416).

(Source: TechTalkTv via The Verge)

The post Samsung Galaxy Z Flip4 Gets Leaked In Its Entirety appeared first on Lowyat.NET.