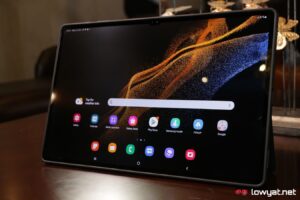 Apart from the Samsung Galaxy S22 Ultra, I also briefly played around with another flagship on the other side of the spectrum, the Tab S8 Ultra. Both a follow-up and one-up to the Tab S7+, the new tablet is clearly packing some top-notch hardware and, among other things, a massive display.

Once again, as far as aesthetics go, the Tab S8 Ultra isn’t looking to win any awards in the design department. The back of the Graphite-theme model in my hands looks plain, clean, but sleek. The only fixtures and fittings that are visible are the 13MP+6MP dual main camera and the magnetic strip to hold the S Pen, which stretches down approximately half of the tablet’s vertical length.

Then there’s the front. I’m not joking when I say that the display is massive. The panel measures in at 14.5-inches, which is way bigger than Apple’s current and largest iPad Pro, which measures at 12.9-inches. Honestly, at that size, the Tab S8 Ultra feels like a laptop masquerading as a tablet. If the sheer size of the panel doesn’t take you by surprise, I’m certain the other elephant in the room will: the big, visible notch at the top of the display. Specs-wise, it’s a Super AMOLED with 120Hz refresh rate and HDR10+ ready too.

Of course, the notch has its purpose and in this case, it’s housing the dual 12MP front-facing cameras, fitted primarily for better conference calls; it’s a piece of enhanced hardware Samsung is providing as to enhance the work-from-home situation, which has become increasingly common over the course of this pandemic. Of course, I didn’t actually get a chance to put either the rear or front cameras to work, on account that Samsung did not allow any photography or videos to be taken with them.

As for the other specs of the tablet, the Tab S8 Ultra houses a Qualcomm Snapdragon 8 Gen 1 – again, no Exynos 2200 on account of a production issue – up to 16GB RAM, between 128GB and 512GB internal storage capacity, and a 11200mAh battery. Capable of 45W fast-charging. To that end, the performance of the 8 Gen 1 shows; transition animations are smooth, apps load up instantaneously, as is switching between them.

Moving on, the Tab S8 Ultra’s dedicated S Pen is as intuitive and responsive as ever, with the new one having been slightly improved. It’s sensitive too; laying it down on the tablet’s surface, it still registers moving and input, even when the tip isn’t in contact with the screen. It’s a very minute oversight, but one that clearly isn’t going to impact the overall S Pen experience. As for the type cover, it’s a basic cover-based keyboard, so nothing out of the ordinary.

With all that’s been said, we certainly will need to spend more time with the Galaxy Tab S8 Ultra as our daily driver, in order to formulate a proper and in-depth review. Stay tuned for the latter.