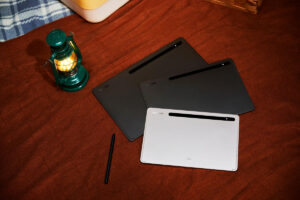 Samsung has officially launched its new Galaxy Tab S8 trio, which consists of the standard model, a Plus variant, and a high-end Ultra model. All of which you may have already been familiarised with by now, thanks to the numerous leaks that have popped up online throughout the months leading up to today’s major launch.

Were the information provided by the tipsters accurate? Indeed most are, but we’ll run through each tablets’ specifications again in this report, along with official details provided by the company.

Let’s start with the vanilla and Plus variants of the new Galaxy Tab S8 series. Both devices are equipped with Qualcomm’s latest flagship mobile chipset, the Snapdragon 8 Gen 1, along with memory configurations of up to 12GB of RAM, up to 512GB of internal storage, and supports expandable storage via micoSD. The duo also comes with AKG-tuned quad speakers, a USB-C port for charging and data transfers, Wi-Fi 6E connectivity, Android 12 via Samsung One UI 4.1, and are bundled together with S-Pen styluses out of the box.

Display-wise, the standard Galaxy Tab S8 is equipped with a 11-inch LTPS TFT display with 2560 x 1600 pixel resolution, whereas the Plus version has a 12.4-inch Super AMOLED panel with 2800 x 1752 pixel resolution – both of which feature a high refresh rate of 120Hz. It is worth highlighting that the former comes with a side-mounted fingerprint sensor for user authentication, while the latter uses an in-display scanner instead.

In terms of battery, the vanilla model is powered by a 8,000mAh cell, whereas the Plus is equipped with a larger 10,090mAh capacity. The two tablets feature up to 45W of fast charging support via USB-C.

As for imaging, housed within either models’ rear camera array is a 13MP main shooter and a 6MP ultra-wide sensor. Meanwhile, situated in the side bezel of both devices is a 12MP ultra-wide selfie camera.

For the first time ever, Samsung has introduced an Ultra variant to its flagship tablet series. As you might expect, this version comes with top-end features and, obviously, a larger display and even bigger battery capacity when compared to its siblings.

The new Galaxy Tab S8 Ultra sports a massive 14.6-inch Super AMOLED panel with 2960 x 1848 pixel resolution, 120Hz refresh rate, and an under-display fingerprint sensor. True to what was leaked prior to this, the high-end flagship tablet does feature a notch to house dual front-facing cameras. And like its two siblings, it also comes with AKG-tuned quad speakers, Android 12 via Samsung One UI 4.1, Wi-Fi 6E connectivity, and an included S-Pen stylus.

Most interestingly, Samsung has introduced a new multi-device collaboration feature which allows users to link the Galaxy Tab S8 Ultra to the new Galaxy S22 Ultra smartphone – using the latter as a companion display in certain apps like Clip Studio Paint. Moreover, the tablet also comes with Wireless DeX that enables for a more desktop-like interface when hooking it upp to an external display.

Under the Ultra variant’s hood is the same Snapdragon 8 Gen 1 chipset, but with memory configurations of up to 16GB of RAM, up to 512GB of internal storage, and also an expandable storage support via microSD. Powering the device is a massive 11,200mAh battery, which comes with 45W fast charging capability via USB-C.

Photography-wise, the Samsung Galaxy Tab S8 Ultra features a 13MP primary camera on its back, alongside a 6MP ultra-wide shooter. Housed within the aforementioned notch is a dual 12MP front-facing camera setup for wide and 120-degree ultra-wide shots respectively.

As for colour options, the standard and Plus versions of the Galaxy Tab S8 is offered in either Silver, Pink Gold, or Graphite. The Ultra variant, on the other hand, is only available in Graphite. It is also worth noting that while the global release for all three devices are offered with 5G + Wi-Fi connectivity or Wi-Fi only, the local release may only see the latter configuration to be made available.

In terms of local pricing and availability, please stay tuned for a follow-up report regarding this shortly.