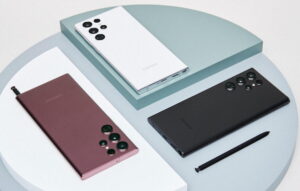 You may have heard of its imminent arrival for the past few weeks or months and the wait is finally over. Just moments ago, Samsung has officially unveiled its first top-of-the-range Galaxy flagship model of 2022 in the form of the Galaxy S22 Ultra.

According to the company, their intention behind the Galaxy S22 Ultra is to have the firepower and productivity-friendly nature of the Galaxy Note Series to be fused together with the photography and videography prowess of the Galaxy S Series.

This explains why the new phone now features an integrated S-Pen even though it might not be the first Galaxy S phone to support the stylus as that honour belonged to last year’s Galaxy S21 Ultra. Nevertheless, Samsung noted that the Galaxy S21 Ultra’s S-Pen has a much better latency at 3.8ms as compared to the latter’s rating of 9ms.

This was apparently made possible by the phone’s AI-based coordinate prediction technology and a new Wacom chip that improves the speed of coordinates from up to 360 to 480 circuits per second. The company also said the Galaxy S22 Ultra is able to recognise handwriting in 88 languages which is 12 more than before.

The new phone also marked the debut of Collaboration View which allows Galaxy S22 Ultra to be hand-in-hand with the equally new Galaxy Tab S8 tablet. One usage example that Samsung has highlighted is that users can access their drawing tool settings separately in Galaxy S22 Ultra so that they can have all of the screen space on the Galaxy Tab S8 tablet dedicated for drawing.

When it comes to photography and videography, the Galaxy S22 Ultra relies on several different cameras on its back including the 108MP f/1.8 Dual Pixel camera and 12MP ultra-wide f/2.2 camera. In addition to that, the new flagship model has also been equipped with two 10MP telephoto cameras.

One of them has an f/2.4 lens and 3x optical zoom capability while the other telephoto camera comes with an f/4.9 lens and is able to deliver 10x optical zoom. Through its Space Zoom feature, the Galaxy S22 Ultra can provide up to 100x digital zoom.

As for selfies, it is being handled by a 40MP f/2.2 camera that is housed on the centre top part of the phone’s 6.8-inch Dynamic AMOLED 2X display. Speaking about the display, it comes standard with an ultrasonic fingerprint reader and also has a variable refresh rate capability of up to 120Hz.

While Samsung generally called the chip that is powering the Galaxy S22 Ultra as a “4nm Processor”, the actual component depends on each market. For example, the variant that will be released in Malaysia comes with Qualcomm Snapdragon 8 Gen 1 while the European markets will be receiving Samsung Exynos 2200 instead.

In terms of memory and storage options, it starts at 8GB RAM and 128GB internal storage. One can also opt for the variant with 12GB of RAM which has three different storage capacities including 256GB, 512GB, and 1TB although the availability of these options still depends on respective markets.

Similar to last year’s Galaxy Z Fold3 and Z Flip3, Samsung has once again included durability as one of the key points for the Galaxy S22 Ultra. Just like both foldables, the chassis of the new model was made from Armor Aluminium which the company claimed as its strongest aluminium to date.

The IP68-certified phone also features Corning Gorilla Glass Victus+ on its front and back to further boost its durability. Rounding out the general specifications of Samsung’s new king of the hill is a 5000mAh battery that can support up to 45W wired charger and 15W wireless charger.

To know more about the pricing and availability of the Galaxy S21 Ultra in Malaysia, check out our subsequent report right here. If you want to take a closer look at the new model, then make sure you don’t miss out on our initial hands-on experience with Galaxy S21 Ultra in this report.