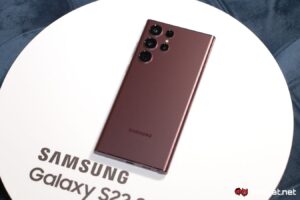 Always pushing the boundaries and obsessed with making the best smartphone to customised to your needs, Samsung, the world’s largest consumer electronics manufacturer is undoubtedly making a return with their flagship Galaxy Note series – The Samsung Galaxy S22 Ultra!

So if you’re still tearing up and wondering if the Galaxy Note series is gone forever, we urge you to stop and sprint to your nearest Samsung Experience Store to witness the passionate transformation of the Galaxy S22 Ultra with your own eyes!

Surely its slick design and classy colourways have already captured a million hearts, however appearance is not the only thing that matters. This is especially for enthusiastic gamers, who will certainly want to dive deeper into the phone’s specs!

Whether you’re a fan of Genshin Impact, Mobile Legends, PUBG or other taxing 3D games, you can now be rest assured you will no longer experience any lag while intensively trying to beat your foes. You’ll be glad to know that the new Samsung Galaxy S22 Ultra today is backed by the most powerful flagship chipset to date, namely the Qualcomm Snapdragon 8 Gen 1 processor! Better connectivity with higher fps, Galaxy S22 Ultra is ready to rock all your gaming records!

When you’re shooting videos or taking images, the Galaxy S22 Ultra offers the ability to recognise what is captured by its powerful camera setup and prompt it to decide the best frame rate and enhancements based on lighting conditions. Notably, what really sets the phone apart from its predecessor is its improved AI-powered image processing, which is twice better and can further reduce image noise, as well as improve the overall picture quality – especially night shots! Along with that, the Galaxy S22 Ultra provides a sharper and better stabilisation as well via its 10x telephoto zoom!

Indeed, the new Samsung Galaxy S22 Ultra is undeniably hot, but definitely not in the literal sense! Featured onboard the device is a new cooling system that’s capable of dissipating heat 3.5 times more efficiently than ever before, as its internal vapor chamber covers a wider area. For heavy users and gamers, you can finally have peace of mind when relying on Samsung’s mobile powerhouse for your productive or intense gaming needs!

The Longest Battery Life In The Galaxy S Series

Battery life has always been a concern to most users, but don’t worry because the Galaxy S22 Ultra is equipped with a long lasting 5,000mAh battery with 45W flash charging! In regards to the latter, it is a major upgrade over its predecessor’s 25W fast charge capability. Just imagine binging on your favourite Netflix series or video calling your partner for hours, only after a 10-minute charge!

A Special Samsung Galaxy S Promotion Not To Be Missed

Pre-order the new Samsung Galaxy S22 series now and enjoy exclusive rewards worth up to RM1,168! These include a Galaxy Watch4 Bluetooth (40mm) and a Galaxy X LAMY Safari Twin Pen to make your everyday epic even more epic!

The pre-order of the Galaxy S22 series will be available at Samsung Experience Stores, Samsung Authorised Partner and Samsung Malaysia Online Store. To find out more about the pre-order offers, you may visit https://www.samsung.com/my/offer/mobile/galaxy-preorder-2022/

To pre-order the all-new Galaxy S22 Series, kindly follow the links below:

This article is brought to you by Samsung Malaysia.