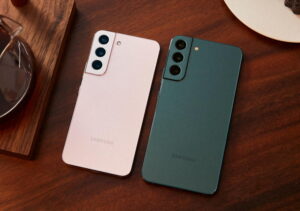 Just like the Galaxy S22 Ultra and Galaxy Tab S8 Series, the standard Galaxy S22 and S22 Plus are now readily available for pre-order in Malaysia. In fact, customers that pre-order either of these models at Samsung Malaysia eStore will also receive an RM800 eVoucher that they can use in their next order at the store.

Similarly, a Silicon Case with Strap and Lucky Box will be provided to all pre-order customers as well. The only item that is different for the Galaxy S22 and S22 Plus is a Camera Filter Mount that seemed to be specially made for both models.

As for the pricing, it is identical to the launch price of S21 and S21 Plus with the exception of the latter’s 128GB variant which costs slightly higher this time around:

All of these variants can be obtained in Phantom Black, Phantom Silver, Green, and Pink Gold. If you are interested to get your hands on one, you may do so through Samsung Malaysia eStore by 3 March 2022.

The post Samsung Galaxy S22 and S22 Plus Price In Malaysia Starts From RM3,499 appeared first on Lowyat.NET.