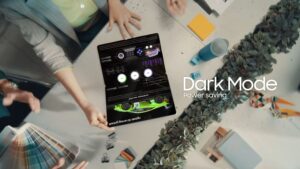 Earlier this year, we got a chance to take a look at the ASUS Zenbook 17 Fold OLED, the brand’s first consumer-ready, foldable display laptop that is all-screen. The technology is still novel by any and all accounts but clearly, it is picking up momentum to the point that Korean electronics giant, Samsung may actually just release a laptop of a similar nature.

Samsung alleged interest in foldable display laptops isn’t all that surprising; it was the Korean giant that supplied ASUS with its foldable OLED display technology that gave birth to the latter’s laptop, after all. On that note, Samsung is expected to enter the market with one such laptop, featuring a 17.3-inch OLED panel.

According to reports, the 17.3-inch OLED foldable display will be able to fold into half, with each half of the display measuring at 13.3-inches across. In terms of functionality, it appears that Samsung will relegate the bottom half of the laptop to serve as a touchscreen keyboard, assuming that the brand won’t be bundling the finished product with a Bluetooth-powered keyboard.

Beyond that, there sadly isn’t a whole lot else regarding Samsung and its foldable display laptop. Needless to say, there are still too many unknown variables about the yet unlaunched product, such as battery longevity, how many ports it would be warranted, along with which ports Samsung could actually provide it.

Another unknown is what chipset the brand would opt for although, having said that, it is highly likely that it would go the way of Intel by virtue of the chipmaker’s EVO technology, if nothing else. Going slightly off-tangent, it is also rumoured that Samsung had intended to launch the foldable display laptop earlier this year, but put that plan on hold and made the decision to postpone said launch of the device to next year.

As to when Samsung could launch its laptop with a foldable display, there are two launch windows: the first is CES 2023, which is happening at the start of next month, while the second would be during the brand’s bi-annual Unpacked event.

The post Samsung Could Launch Laptop With Foldable Display Next Year appeared first on Lowyat.NET.