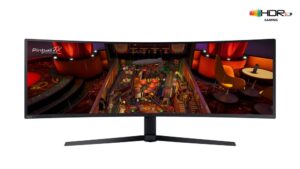 Samsung Electronics (Samsung) announced that a select number of its 2022 4K and 8K TVs, along with its gaming monitors, will support its new HDR10+ GAMING standard, that it says will deliver the most immersive and ultra-responsive HDR experience to gamers.

The new “gaming” standard was developed by HDR10+ Technologies and is aimed at giving game developers the tools to provide gamers with what it describes as a more “compelling and consistent” HDR gaming experience, all without the need to manually calibrate the display. Additionally, Samsung says that its upcoming TVs and gaming monitors will be compatible with NVIDIA’s GeForce RTX 30 series, RTX 20 series, and GTX 1600 series GPUs, implying that their monitor will ship out fitted with the GPU maker’s G-SYNC module or just be G-SYNC Compatible. That said, it is more likely the latter.

Samsung is set to debut the new HDR10+ GAMING feature and its display lineup during CES 2022, which is happening early next month. Adopters of the new HDR10+ GAMING standard includes the game developer studio, Sabre Interactive, who is also expected to showcase the new technology during Samsung’s keynote at the annual exhibition at Las Vegas.