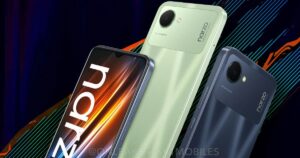 Months after the release of the Realme Narzo 50i in September of last year, a recent report says that the Chinese brand is expected to unveil the Narzo 50i Prime on 22 June, which is literally just days away. The leaked news was reported by 91Mobiles alongside Steve H. McFly a.k.a @OnLeaks who shared the announcement via Twitter.

As per the leaked images, the entry-level device is similar to the Realme Narzo 50, the main difference between the two is that the 50i Prime is expected to feature lower specs. One clear factor that indicates this is the main camera; it houses only one rear camera sensor, rather than two. Further, the camera’s housing and module seemingly take up the entire top section of phone, essentially a fifth of the entire rear. The placement of the camera will be within the camera island, with the branding of the product on display on the right-hand side of the rear.

Besides the camera, the 50i Prime is also expected to house a lower-tier, entry-level chipset, rather than a Dimensity 810 SoC, in which the standard models feature. The smartphone will also be equipped with a 5,000mAh battery, just like the rest of Realme’s Narzo smartphone lineup.

The Narzo 50i Prime will be presented with a full-screen display, accompanied by a waterdrop notch, and the volume rockers, as well as power button, will be located within the right edge perimeter of the device. The line-up will be available in green as well as black shades with a matte finish.

In regards to the price range of the 50i Prime, the report claims that it will be retailed for under US$100 (~RM440), which is quite reasonable considering it is a lesser version of the Narzo 50i in terms of specs.

In spite of its supposedly nearby release, Realme still hasn’t actually released any real news about the 50i Prime. The corporation did, however, announce the release dates for two other products: the Realme C30 and the TechLife Watch R100 both to be released on 20 June and 23 June respectively.

Irfan Iskandar contributed to this article.