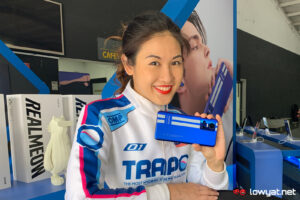 realme has officially unveiled its latest mid-range offering, the GT Neo 3 in Malaysia. The phone was actually launched in China almost three months ago as well as another variant with bigger storage just last month.

The GT Neo 3 runs on the MediaTek Dimensity 8100 with 8GB of LPDDR5 RAM and 256GB of storage with no microSD slot for expandable storage, although the phone is able to use between 2GB to 5GB of storage for RAM expansion. With its steel vapour cooling system, realme claims that the phone can game at 120 fps for 60 minutes while staying at around 40C.

When it comes to its photography capabilities, the three-camera setup is made up of a 50MP main shooter with optical image stabilisation (OIS), an 8MP ultrawide, and a 2MP macro lens. On the front, it sports a 16MP selfie camera as well as a fingerprint sensor underneath the 6.7-inch 120Hz AMOLED display.

The GT Neo 3 is powered by a large 5000mAh battery and supports 80W wired charging which allows the phone to be charged from empty to 50% in just 12 minutes. However, the wireless charging feature is absent from it though

While realme may have a version of the phone with blazing fast 150W charging as well as the Naruto Edition, neither of them is coming to Malaysia.

Ships with realme UI 3.0 which is based on Android 12, the phone also supports Bluetooth 5.3, Wi-Fi 6, and NFC. There is no headphone jack but it does come with stereo speakers that support Dolby Atmos.

Available in two colour options: Nitro Blue, which is inspired by Le Mans, and Sprint White, the realme GT Neo 3 is available with a price tag of RM2,099. That being said, those who purchase the phone through realme’s Lazada store from today until 17 June will only have to pay RM1,799.