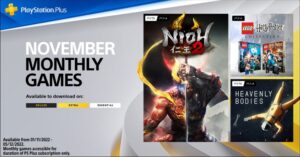 October has been a pretty great month for local PS Plus subscribers, simply due to the sheer number of games we got over the other regions. That’s not to say that there weren’t a few good inclusions among them. But for November, we’re definitely getting quality over quantity, simply because one of the free games we’re getting is Nioh 2.

The game should need no introduction. But for those who need it, this game improves upon Team Ninja’s initial take on the Soulslike formula, and turned the speed dial up. Your custom protagonist gets their own Yokai transformation too, adding even more complexity to the game. If you like games that put your skills to the test, then this is about as good a game as you can get. And if you’ve been a subscriber since November of 2019, then you’d have claimed the whole series for free.

Moving down the list of free games PS Plus subscribers can claim next month, we have Heavenly Bodies. The odd one in this list, this indie title is about solving physics-based puzzles in space. You control your astronaut’s arms with the left and right analogue sticks, with the L2 and R2 buttons controlling your hands. This makes for a game that’s simple in its idea, but not as easy as the premise implies.

Last on the list is the LEGO Harry Potter Collection. This is the only game on the list that is limited to the PS4 version, where the previous 2 will give you both PS4 and PS5 versions. The title is pretty self explanatory – you play a LEGO rendition of the 7-year Harry Potter story, and all that the adventure entails.

Your PlayStation Plus Monthly Games for November:

If you are a PS Plus subscriber of any tier, you can claim these three games for free starting 1 November 2022. If you have yet to claim this month’s games, it’s best you do so soon.

The post PS Plus Subscribers Are Getting Nioh 2 In November appeared first on Lowyat.NET.