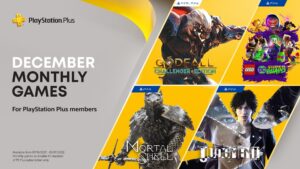 Last week, the free games for PS Plus subscribers in December got leaked. It looks like the leak is accurate for the fourth month in a row now. But as an added bonus for us in Asia, we are also getting an extra game, and what a game it is.

Going over the list, we have Mortal Shell and LEGO DC Super Villains. The former was pegged as possibly getting replaced for Asia, but that ultimately didn’t happen.

Then we have Godfall: Challenger Edition, also in the list of free games for PS Plus subs this month. It was not clear what this was before, but now, on the official PlayStation Blog, the devs at Counterplay Games have an explanation. Essentially, it’s the same game without the story portion. Instead, you get boosted immediately to the end game, with maxed out base level so you can start grinding immediately.

Play as hero or become the villain with the PS Plus games in December!

Now for the best part of this PS Plus list for the month of December. As an added bonus, we are getting a fourth game for free in the form of Judgment. This is the Yakuza spinoff where you play as a lawyer turned detective Takayuki Yagami, played by Takuya Kimura.

These games will be available to PS Plus subscribers starting 7 December, all the way to 3 January. If you haven’t already, now’s as good a time as any to get this month’s list of free games.

The post PS Plus Subscribers Also Get Judgment In December appeared first on Lowyat.NET.