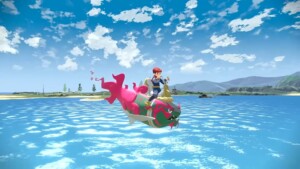 Pokemon Legends: Arceus is scheduled for release next week, on 28 January. But for whatever reason, people have managed to get early copies of the game. While not entirely surprising, some of these people have also streamed their gameplay.

VGC reports that these streams are not only appearing on Twitch, but also other platforms like TikTok and Instagram. Some of those who have gotten early access to the game have also started dumping the game’s files onto PC to discover secrets early.

The report notes that it’s unclear whether these copies of Pokemon Legends: Arceus were obtained legally or not. Either way, it’s probably safe to expect a very heavy handed crackdown from both Nintendo and The Pokemon Company. After all, the precedent was set by the massive fine the companies laid on the leakers of the Pokemon Sword and Shield roster.

But that’s for the big corporations to decide what they want to do. If you’re a fan of the franchise and have been waiting for the release of Pokemon Legends: Arceus, then this is one more thing to be careful about when you’re online. Story spoilers are bound to be floating around, along with probably more useful information later on like where to get specific creatures.

The post Pokemon Legends: Arceus Appear On Stream A Week Before Release appeared first on Lowyat.NET.