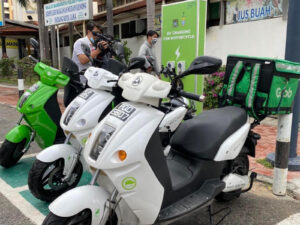 Penang executive council member and the chairman of the state’s infrastructure and transport committee Zairil Khir Johari said that the initiative is aimed at promoting e-motorcycle usage as the island aims to halve its carbon footprint by 2030. The three stations currently in operation are located at Astaka Persiaran Gurney, Medan Renong Padang Kota Lama, and Astaka Batu Lanchang, with each location featuring two dedicated parking spots.

As for the six remaining stations, they are still under construction and will begin operations soon, though Zairil did not specify exactly when this might happen. They will be located in the public parking areas at 1st Avenue Mall, Kompleks MBPP Lebuh Pantai, Kompleks Desiran Tanjung, Kompleks Sri Selera Bayan Baru, Bukit Jambul Kompleks, and Kompleks Bukit Gedung.

The state councillor encouraged local e-motorcycle distributors and courier companies to also contribute free charging stations to promote the low-carbon vehicles. According to Penang Mayor Yew Tung Seang, the city council has been using 10 electric motorcycles since 2015 and he is certain that technological advancements will increase the adoption of electric vehicles.

Liew Chun Peng, managing director of Malaysian e-motorcycle company Eclimo, said that there are an estimated one million motorcycle units in Penang with e-motorcycles making up less than one per cent of that number. The company launched a pilot project that saw 50 food-hailing riders introduced to electric scooters, saving them petrol costs with the free charging stations.

Eclimo’s ES-11 electric scooters start at RM10,501 and can go up to RM14,570 depending on the configuration, while Yamaha will soon be testing its new electric scooter in the Malaysian market. For those who drive electric cars, Setel recently added support for JomCharge charging stations, making payments easier for juicing up your EV.