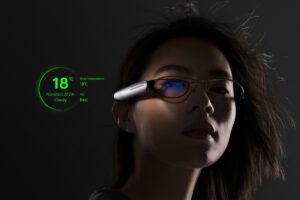 OPPO has unveiled the Air Glass, its first ever smart eyepiece with augmented reality (AR) capability. Rather than utilising two lenses a la conventional glasses, the new device relies on only one for projecting 2D information into your field of view. According to its promotional video, the new device is magnetically mounted on the right side of an included lensless spectacles frame that is included together with it.

The OPPO Air Glass is equipped with a Qualcomm Snapdragon 4100 processor and comes with a Micro LED projector that is capable of displaying projections of up to 3 million nits peak brightness onto its glass. The stem attached to the lens features touch-based controls, and the device itself can also be controlled via a dedicated app that is available for Android phones, especially first-party phones with ColorOS 11 or above. Visible on the opposite end of the stem is what appears to be a speaker, likely for hands-free calls and navigation.

OPPO claims the Air Glass is able to last for three hours of active usage and 40 hours on standy. Aside from the dedicated spectacles frame mentioned earlier included together with the device is a dock for storage and charging. Unfortunately, the company did not detail whether the dock comes with energy storage for charging while mobile or if it features some kind of fast charging technology. As for colour options, the frame is available in either black or silver, while the dock comes in either black or white.

Features-wise, the new AR eyepiece is intended for straightforward and simple uses rather than projecting full-colour 3D objects. OPPO says it can be used to display weather info, notifications, and real-time translation in 2D monochrome (green, according to the aforementioned video), as well as functioning as a teleprompter. On that note, maybe we’ll be seeing the brand’s representatives wearing the new Air Glass during their online events in the near future?

In regards to the translation feature, OPPO says the Air Glass supports Chinese, English and Japanese for now. The onboard navigation system, on the other hand, currently supports Baidu’s Walk & Bike Navigation, as well as Explore Nearby.

And just in case you’re wondering, despite its close resemblance to the fictional “Scouter” device from the popular anime and manga series Dragon Ball Z, it does not feature the ability to gauge a person’s power level. Whether it can be easily crushed in the palm of your hand is a whole different matter, and would be better if left undiscussed.

While the Air Glass is planned to go on sale early next year, OPPO notes that the device will only receive a limited release. That being said, the new AR eyepiece will first be available in China in the first quarter of 2022, although its pricing has yet to be announced. The company has not mentioned any plans of shipping it to other regions including Malaysia at this time.