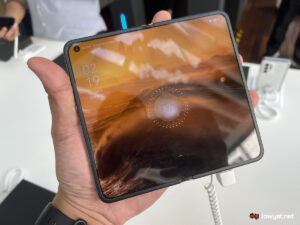 OPPO recently launched its first ever foldable smartphone in China, known as the Find N. While arriving later than the Samsung Galaxy Z Fold and Huawei Mate X series, you may wonder what kind of advantages or features it may have over the competition. Thankfully, OPPO Malaysia has provided us the opportunity to try out the new foldable for ourselves in order to share our experience with it.

Firstly, the Find N is definitely unlike the two aforementioned devices from Samsung and Huawei in terms of form factor. While the Galaxy Z Fold and Mate X phones offer a thinner and taller exterior display, OPPO’s foldable phone features a more compact design. In fact, having it in hand almost felt like I was holding a smaller smartphone, such as an iPhone mini – and that’s not a complaint whatsoever. That being said, the Find N is equipped with a Corning Gorilla Glass Victus protected 5.49-inch AMOLED display with an aspect ratio of 18:9, 60Hz refresh rate, and resolution of 988 x 1972 pixels. On the upper left corner of the screen is a punch-hole cutout for its front-facing 32MP camera.

Despite being thicker than your conventional compact phone in its folded form, it is actually pretty comfortable to hold. I actually could see myself using the Find N in this mode more often thanks to how familiar and natural it feels when held in one hand. However, the fact that its volume rocker and lock/power button sits parallel to each other in its folded form may need a bit of getting used to.

Of course, the true charm of OPPO’s foldable phone is realised when unfolded, revealing its larger 7.1-inch display. Unlike its exterior, the inner screen features an LTPO AMOLED panel with a resolution of 1792 x 1920 pixels and refresh rate of 120Hz. But like the front panel, there is a punch-hole cutout for another 32MP selfie camera – quite a large one at that.

Much like its competitors, the Find N’s unfolded form is also presented in an almost square-ish aspect ratio – enough to pass and function as a small-sized tablet. And just in case you’re wondering, OPPO’s device is the smallest among the three book-styled foldable phones, just 0.5-inches shy of this year’s Galaxy Z Fold3.

What really sets the Find N apart from Samsung and Huawei’s foldables is the nearly unnoticeable crease. In most viewing angles, the phone’s inner display appears flawless and flat, which is a huge advantage over the more obvious creases visible on its two competitors. This is thanks to its Flexion Hinge mechanism that eliminates the gap between displays when folded, resulting in a minimal crease that the brand claims to be 80% less noticeable when compared to other similar devices.

Naturally, the Find N’s unfolded form is the mode to go for if you plan to enjoy video content, reading and gaming, thanks to the higher resolution and smoother refresh rate. OPPO also introduced new multitasking features and tricks for this mode. Sliding down two fingers in the middle of the display will activate split-screen mode. This minimises the current window to only on half of the screen while the other half reveals the home screen – enabling you to pick and open a seperate app to be displayed on the other side. Alternatively, you may also minimise an app into a smaller floating window, which is useful for opening up websites for quick references and so on.

Like the other foldable phones, OPPO’s own device also comes with laptop-esque functions, where one half will function as a screen while the other is used for controlling numerous things such as video playback, text input, or camera controls. Additionally, the exterior screen can also function as a camera preview if you wish to take selfies with the rear cameras.

Speaking of which, the OPPO Find N comes with a triple camera setup on its back. This consists of a 50MP primary, 13MP telephoto, and a 15MP ultrawide. The cameras performed well in both photography, selfies and video capture, but I wasn’t able to fully evaluate them due to how brief my time with the phone during the preview.

Unfortunately, the same can be said about the device’s overall performance in terms of app usage, gaming, battery life, and audio quality. That being said, you can expect a full review of the Find N from us, should OPPO release it in Malaysia.

And on that note, the company has yet to reveal whether its first ever foldable phone will ever launch in other regions outside of China. In terms of pricing, the OPPO Find N is slated to retail at CNY7,699 (~RM5,093) for the 8GB + 256GB configuration, and CNY12,000 (~RM5,953) for the 12GB + 512GB variant. It is offered in three different colour options: Black, White, and Purple.