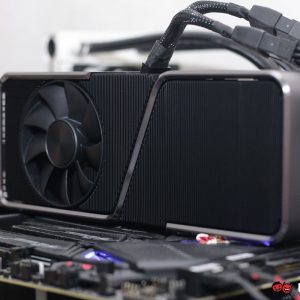 News about NVIDIA’s GeForce RTX 4080 graphics card has been gaining traction of late. The most recent news about the card reportedly revolves around the company mulling over two specification choices: ship out a card with 12GB or 16GB GDDR6X memory.

The news comes, yet again, by way of Twitter user MEGAsizeGPU (@Zed_Wang), who says they recently received information about the RTX 4080’s access to the two memory specifications. Interestingly, while both memory variants will use GDDR6X, they don’t have the same number of PCB layers. Simply put, the 12GB variant has a 10-layer PCB while the 16GB is based on a 12-layer PCB.

The alleged news of the RTX 4080’s dual GDDR6X specifications comes after a leak suggesting that NVIDIA is considering launching the RTX 4070 in either a 10GB or 12GB GDDR6X variant, and both models will have sub-variants of each other. Additionally, the rumour also comes after an image of the supposed GPU found its way online. The card, wrapped in anti-static bagging, also showed off a slightly different logo design for the card’s designation. Specifically, the font used for the numerics looks less bold, especially when compared to the current font that we see for both the RTX 30 series and RTX 20 series.

Beyond this news, sadly, there still isn’t a great deal of information surrounding this particular RTX 4080 rumour. To be fair, though, this sort of multiple-options-on-the-table approach isn’t anything new for NVIDIA; the RTX 3080, for example, was actually designed with memory capacities of 10GB, 12GB, 16GB, and 20GB. Ultimately, NVIDIA settled on releasing the card in the 10GB and 12GB flavours, although the latter variant only began making its rounds nearing the end of the GPU’s lifecycle.

On a side note, MEGAsizeGPU also mentioned that the RTX 4090’s reference design for board partners will ship out on a 14-layer PCB, which is an increase in size for over the last generation RTX 30 series flagships, which used a 12-layer PCB.

The post NVIDIA GeForce RTX 4080 Could Have 12GB Or 16GB Memory appeared first on Lowyat.NET.